While we all see the work on screen of the Dame Maggie Smith’s and Hugh Bonneville’s of the world in Downton Abbey, the hard work is the behind-the-scenes never-ending work of Lisa Heathcote. As the food stylist for Downton Abbey, Heathcote sums up her efforts by acknowledging the biggest challenge, “OK, this food has got to stand there all day, it has got to look good, it has got to taste good, and it has also got to be something that you want to nibble at all day. Otherwise you’re just going to feel not so good after about the third or fourth take, because they’re doing take after take after take.

It’s the job of Heathcote to create every tantalizing morsel that appears onscreen in Downton Abbey. But not all of it is edible, and chances are if you see Mrs. Patmore slaving away at a dish, it may never be served or eaten. Working with Julian Fellowes’ scripts and the series’ set designer, Heathcote plans what Mrs. Patmore & Co. will cook during scenes and what will be served to the Crawleys and their guests upstairs. Then in her professional kitchen, she cooks the food, packs it up, and drives it to the set, whether at Highclere Castle or the film studio, Ealing, the home of Downton Abbey‘s below stairs set. 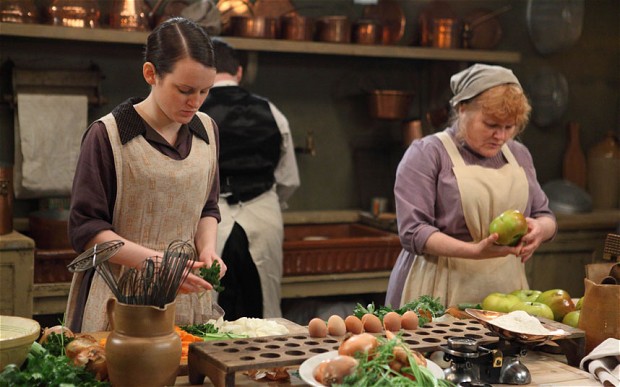 In this interview with Splendid Table, host Lynne Rossetto Kasper talks with Heathcote who says her job as series food stylist is like preparing food for 80-90 people because, “…It’s a bit like running a restaurant. It’s like mass catering because you imagine there are 20 around the table. We’ll refresh the plates every two or three takes. It’s like catering for about 80 or 90 people.” Here, the cast and producer talk about Heathcote’s no shortcuts and sometimes smelly approach to getting the dinner scenes just right.

Not to be left out of the equation, downstairs actors Rob James-Collier (Thomas), Jim Carter (Carson), Joanne Froggatt (Anna) and Phyllis Logan (Mrs. Hughes) explain how the other half eats in discussing dining ‘downstairs’ at Downton Abbey and how their food is actually edible.

So, beginning January 2016, when you settle in for the beginning of the final series of Downton Abbey, you might not be quite as envious of those getting to eat ‘upstairs’ when you realize the cream cheese salmon mousse actually has no salmon in it, the prawns are fake and the ‘fish’, is actually chicken.

As Heathcote explains, “We don’t use real fish because it just gets a little smelly and it’s also not great for the actors. I put gelatin in it, set it in a mold and, if you put cottage cheese in as well, then it looks like flakes of fish. Bon Appetit!