As the world awaits the release of Star Wars VII: The Force Awakens, last night’s Children in Need telethon on BBC1 did its best to give the Star Wars-Nation faithful something to ease the wait until the long-awaited mid-December premiere. Now in its 35th year, the Children in Need is the BBC’s UK charity effort that has raised over £600 million to change the lives of disabled children and young people in the UK. 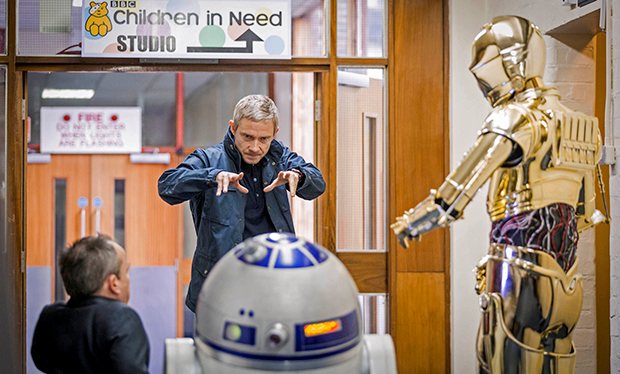 Much like their fundraising telethon cousins, Red Nose Day and Sport Relief, the Children in Need effort solicited the talents of a number of the top names from the UK acting and performance world. Last nights broadcast definitely did not disappoint when it came to some top-notch sketch material.

The Force was definitely with Sherlock‘s Martin Freeman as he channeled his inner Yoda and delivered a spot on performance of the Jedi Master. Doing his best to try and convince Warwick Davis, C-3PO and R2-D2 that he was the ultimate Star Wars super fan, Freeman faced stiff competition from the likes of Lord Sugar, Great British Bake-Off hosts, Mel Giedroyc and Sue Perkins, and Stephen Merchant along the way to the BBC studios. Even The Stig briefly got into the act before the threesome finally hooked up with BB-8, the droid tasked with pushing the first totalizer of the evening.

All in all, another brilliant sketch showcasing the talent and efforts of the cream of the UK acting community as they came together for a worthwhile cause that, at this point, raised just over £37 million on-air last night. And, the other good thing that almost went unnoticed, we are now officially only one month away from the premiere of Star Wars VII: The Force Awakens!