Ever the eternal dreamer, David Brent is still trying to launch a music career. A decade removed from his stint as manager of the Slough branch of Wernham Hogg Paper Merchants, Brent started a new career as a talent manager in the music industry, trying to help urban solo artist Dom Johnson, played by UK rapper Doc Brown, a.k.a. Ben Bailey Smith, secure his big break. “He’s had to take two weeks off work and cash in his pension, because the session musicians in the band are costing him more than he’s getting in ticket sales.” Accompanying Brent on the road will, again, be Doc Brown.

In Life on the Road, we return to the sometimes bitterly painful-to-watch world of David Brent and follow his last-ditch efforts to be a rock star…and, of course, all that that implies. Brent assumes the film director is making a rock documentary in the vein of Martin Scorsese’s film about the Rolling Stones. Unfortunately, it turns into a ‘where are they now’ film about the former paper merchant turned traveling cleaning product salesman. Sadly, we all know what it means when you ‘assume’.

Picking up more than a decade after the end of The Office, Life on the Road will be filmed documentary style, much like its’ comedic predecessor, and follow the tragic attempts of Brent to prove that he really could achieve pop stardom given half a chance. “I’m sure Texas couldn’t run and manage a successful paper merchants. I couldn’t do what… well, I could do what they do, and I think they knew that, even back then“, says Brent. 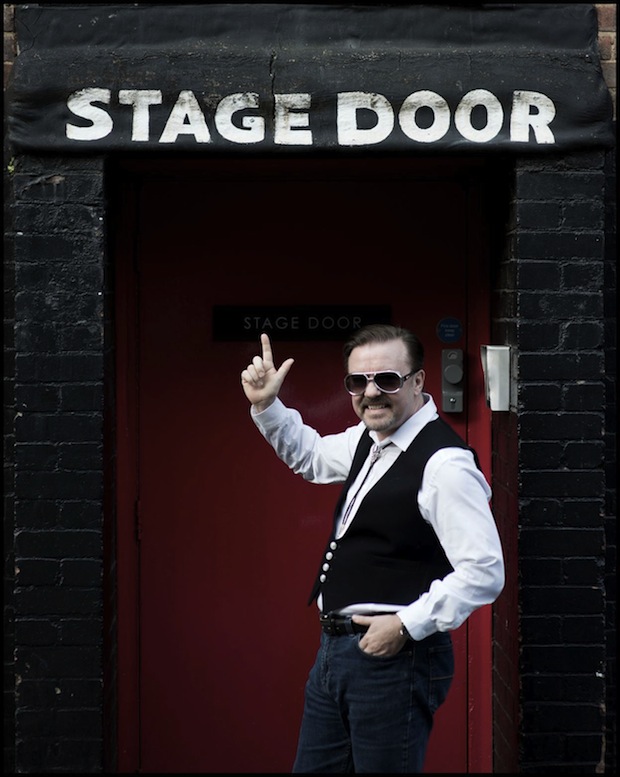 Life on the Road will feature a number of new cringe-worthy Forgone Conclusion tracks in addition to the ever-popular classic “Slough”, an ode to Brent’s hometown. “One has Brent singing about the plight of the Native American Indian. As you can imagine, he got his information off Wikipedia and it’s horrendously pompous and wrong and accidentally insulting. Another is called “Don’t Cry it’s Christmas”, it’s Brent’s Christmas song. It’s a song about an orphan he knew,” said Gervais. ‘Concert’ footage from the movie will, hopefully, include all the Brent classics we’ve come to know and “love” such as – ‘Spaceman Came Down’, ‘If You Don’t Know Me By Now’, ‘Equality Street’ and, most importantly of all, ‘Free Love Freeway’.

During his post-paper company years, Brent continued to hang on to his musical desires with his YouTube series, “Learn Guitar with David Brent”. And, then, even though it didn’t make the Top-100, there was this creepy yet very soulful cover version of “If You Don’t Know Me by Now”, originally made famous by Harold Melvin & the Blue Notes.

Eternal dreamer or not, music is in David Brent’s blood. You may remember this one episode from The Office when David Brent showcased his musical ability by taking over his training session with an impromptu song recital of “Freelove Freeway”, a song he used to sing with his original rock band, Foregone Conclusion. If the thought of a feature length David Brent film isn’t quite enough, not to worry. There’s a Life on the Road soundtrack album in the offing.

Life on the Road is set for its’ UK premiere on 19 August 2016 with a U.S. release shortly after.