U.S. members of Downton Abbey-Nation are waking up daily to the realization that every day Planet Earth rotates on its’ axis means we are one day closer to the Sunday, January 3, 2016 return of the most-watched drama in the history of PBS. What better way to keep our collective separation anxiety at bay than to take a periodic look back at a few individuals that we have come to know and love over the course of the last five years.

Who better to begin our countdown to the premiere than none other than the self-proclaimed ruler of the downstairs kitchen, Mrs. Beryl Patmore. While Mrs. Hughes and Mr. Carson may beg to differ, it is Mrs. Patmore that runs the kitchen under her tight control for some 18-hours a day churning out roughly 8 meals daily including both upstairs and downstairs.

Mrs. Patmore was, and is, the true field general of the kitchen as evidenced by her sharp tongue during the early stages of her relationship with Daisy, Downton’s kitchen maid. “No! Listen to me! And take those kidneys up to the servery before I knock you down and serve your brains as fritters,” she barks ‘lovingly’ towards Daisy. 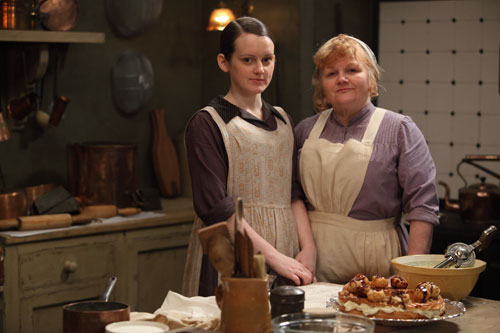 While Mrs. Patmore can appear pretty strict when it comes to running the kitchen, she has definitely shown a caring and forgiving side at times, especially with her newly promoted assistant cook. One only has to think back to the time she sends Daisy an anonymous Valentine’s Day card to spare her feelings in case she did not receive one from someone else. And, let’s not forget that it was Mrs. P who hired the local mathematics teacher at Downton school, Sarah Bunting, to tutor Daisy in her studies.

It was never more apparent than last series just how much the upstairs occupants of Downton care for Mrs. Patmore. When she learns the news that her nephew, Archie, is to be left off the war memorial for the local soldiers who died because he was executed for deserting his post, she is understandably devastated. Finally, Lord Grantham convinces her to attend the unveiling of the Downton memorial and reveals he commissioned a plaque for her nephew’s remembrance outside Downton’s memorial.

Just as the Dowager Countess fears the consequences of electricity taking over Downton, it’s quite clear that Mrs. Patmore is not a fan of the new modern cooking equipment as she desperately tries to avoid technology. Whether it was Daisy using an electric mixer, Baxter using a sewing machine or having to get used to something called “refrigerator”, Mrs. Patmore, in the words of Downton Abbey’s tormented underbutler , Thomas Barrow, is “…not a futurist“.