I know it’s a stretch and probably a huge apples and oranges comparison but one glaring cultural difference between the U.S. and the U.K. occurred at the box office on Thanksgiving Thursday. In the U.S., Hunger Games: Mockingjay – Part 2 topped the charts with gross receipts of just over $10 million (4175 theaters).

In the UK, edging out the Hunger Games pic for the top spot was the live broadcast of the Kenneth Branagh Theatre Company’s stage production of The Winter’s Tale grossing £1.1 million or $1.66 million (520 cinemas). On purely a $$ per screen basis, Shakespeare feasted on Jennifer Lawrence this Thanksgiving. 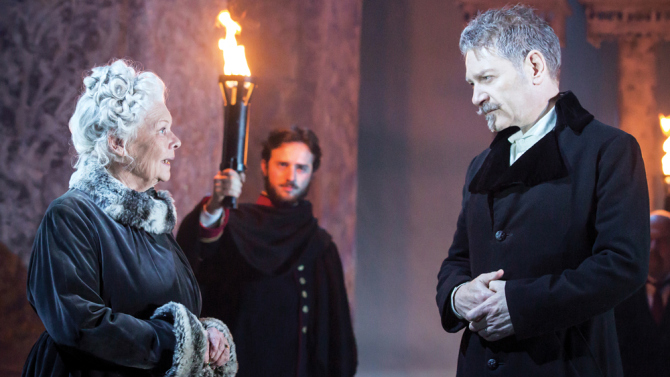 The tragicomedy of obsession and redemption is reimagined in a new production co-directed by Rob Ashford and Branagh starring Dame Judi Dench as Paulina opposite Branagh as Leontes. Broadcast live from London’s Garrick Theatre to cinemas around the U.K., this was just one in a long line of live theatre productions that have routinely beamed to cinemas around the world to not only raise awareness of but to increase interest in live theatre in an era where the popularity of regional and national theatre seems to be dwindling.

The National Theatre Live productions are stellar and have made it possible for countless people around Planet Earth to be able to experience some of the most brilliant acting that exists today. Having had the opportunity to see Danny Boyle’s Frankenstein starring Benedict Cumberbatch and Johnny Lee Miller both live and in the cinema was beyond words. Seeing Helen Mirren portray Queen Elizabeth II in The Audience at the theater only made me want to see it live if the occasion ever arose.

Just to up the ante on the coolness factor of the U.K., The Winter’s Tale, which was broadcast live from London’s Garrick Theatre, was not only screened live in cinemas across the U.K. but it was also aired in more than 100 movie theaters outside the U.K., including Portugal, Spain, Canada, Austria, Malta and Germany. It will also be screened in U.S. movie theaters on Nov. 30. Further broadcasts will be held across the U.K. throughout the Christmas period. Australia and Northern Europe will screen the production in January.

The Winter’s Tale will be the first of many as the Kenneth Branagh Theatre Company Live promises an exceptional series of plays broadcast to cinemas from London’s Garrick Theatre over the course of a year.

For a list of participating U.S. movie theaters and to secure tickets for The Winter’s Tale on Monday, November 30, click here.