Back in 2013, Harrison Ford and Benedict Cumberbatch were both ‘rumored’ to be getting ready for the possibility of a new Star Wars movie. When their paths crossed on The Graham Norton Show in October of that year, little did they know just how much of a mutual admiration society meeting it was about to be. 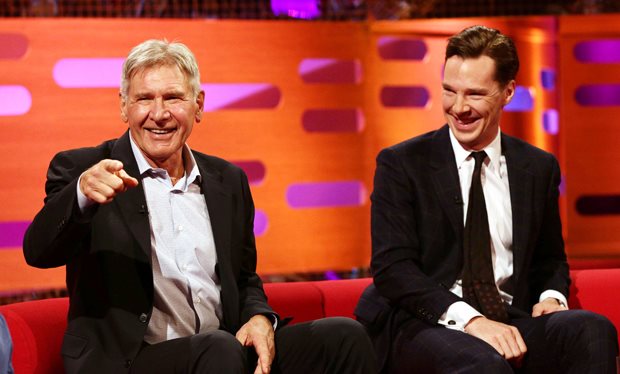 When Benedict Cumberbatch joined Harrison Ford on the couch, little did Mr. Norton realize that he had just placed the actor next to, perhaps, the biggest Sherlock fanboy to have ever piloted the Millennium Falcon. Seems as though the Star Wars actor is a massive fan of Benedict Cumberbatch’s Sherlock, according to his wife, Ally McBeal star and Supergirl actor Calista Flockhart.

“Right now, my son Liam, my husband and I can’t stop watching Sherlock,” she revealed in and interview in the latest issue of Radio Times. It seems as though it’s not just Sherlock that has taken over as British telly is a pretty big deal in the Ford/Lockhart household. “It’s such a good show, although one of my all-time favourites is Downton Abbey. I love that show. I don’t want it to end. I love Maggie Smith,” Flockhart said. “Thankfully, I have another season of Downton to go, so I’m not quite sad about the end yet. I’ve always liked Maggie – I can’t tell you how much I’m in love with her!”

Unfortunately, when Star Wars 7: The Force Awakens opens on December 18, 2015, audiences won’t get to see the two actors on screen together which is probably best given how excited Ford was to be on the same couch that night with Cumberbatch.

Cumberbatch fans, Harrison Ford included, will have to wait until 2016 when the Sherlock actor stars in Marvel’s Doctor Strange.