Last month, Doctor Who showrunner, Steven Moffat, dared to re-open the endless ‘speculation’  that has been going on for several years now surrounding the possibility of Lord of the Rings and Hobbit trilogies director, Sir Peter Jackson, directing an upcoming episode of Doctor Who, saying that Jackson was a “…genuine big old Doctor Who fan“. Moffat then added: “He’s mentioned directing an episode, and then we email him and he doesn’t reply. I think his plan is we all go to New Zealand and spend six months making it and our plan is he comes to Cardiff and makes it in 12 days. There’s that disparity.”

On Sunday, it was Jackson, the self-proclaimed Whovian, who turned up the trolling ante with a brilliant video effort responding to Moffat’s challenge with a tentative definite, non-committal response posted on his Facebook page under the heading of ‘home invasion’. It began as a video record of a seemingly random uneventful early evening at the Jackson home where we see the director polishing his four Oscar statues with daughter, Katie, asking why he hasn’t responded to the Doctor Who and Sherlock showrunner’s numerous emails. 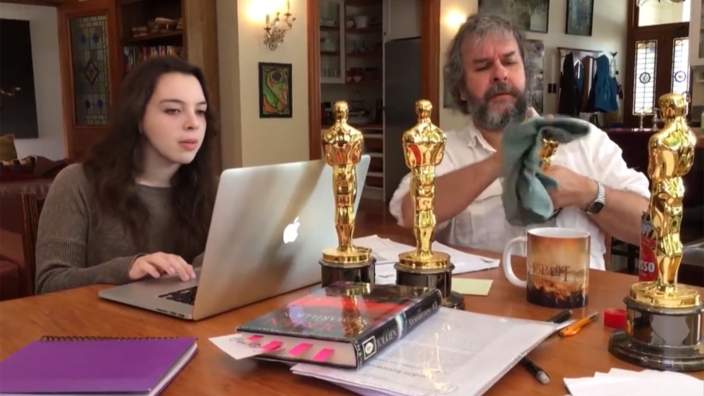 This Jackson family Kodak moment was abruptly interrupted by a seemingly befuddled Doctor (Peter Capaldi) whose one simple task was that of hand-delivering what is presumably a contract from the BBC for Jackson to sign. Sadly, we must wait for Mr. Moffat’s replay as the Doctor runs away from a Dalek that just happens to appear before Jackson can sign the contract.

Recognizing that “…Doctor Who fans can be way more violent than Tolkien fans!“, Jackson may finally be giving the consideration it deserves. Don’t know about you but I’d be totally interested in the possibility of a 10+ hour, 3-part Doctor Who trilogy from the Peter Jackson mind palace. You?