To celebrate the sixth and final season of Downton Abbey by entering a float in the 127th Rose Parade®, held Friday, January 1, 2016. This year, the parade’s theme is “Find Your Adventure.” As a nod to the end of Downton Abbey, the float’s theme is, “The Final Adventure.” 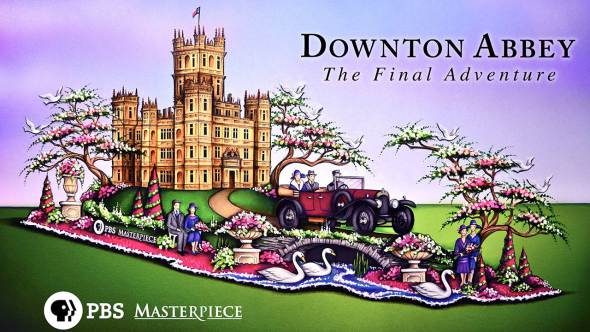 While it might be difficult to live up to Crawley family expectations, this isn’t your run-of-the-mill homemade float that you’d more likely see at a neighborhood Fourth of July parade. PBS says that the float, designed Charles Meier from Paradiso Parade Floats, took about 2,000 hours to construct and will take nearly 6,000 hours to decorate.

At 18′ wide by 24′ high and weighing approximately 15 tons, the float will be a recreation of the Crawley family mansion and grounds, will include English rose gardens and a 1919 Bentley driven by the family chauffeur. A custom-made elevator lift was created for Downton Abbey’s central tower. The lift will allow the tower to drop straight down into the center of the castle so that it can pass under power lines and bridges.

The float will feature more than 60,000 roses in 20 different varieties, including velvety ‘Roseberry’ and ‘Cherry O’; fragile pink ‘Titanic’ and ‘Priceless’. There will also be English garden roses, rarely seen on Rose Parade floats. Oriental lilies, snapdragons, hypericum and a variety of orchids will provide accents throughout the garden.