With just over a week to go before Christmas there is still time to secure the ultimate Christmas gift for that hard to buy for Downton Abbey fan in the family. It’s been a long time since I’ve seen the latenight commercials for the Ronco Inside the Shell Electric Egg Scrambler, Ron Popeil’s Pocket Fisherman or the Ginsu knives that could cut a metal can in half and still be sharp enough to slice a tomato to perfection. 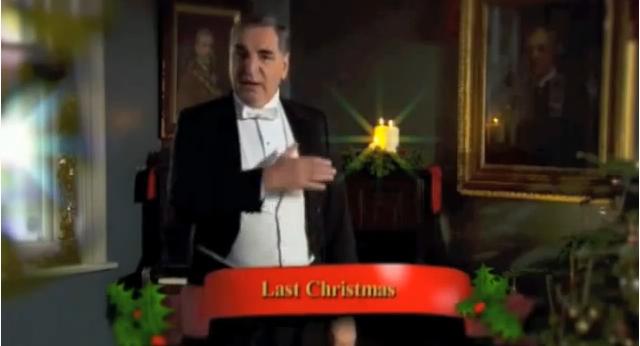 We’ve all seen the music compilation CD’s or DVD’s by that classic group, The Original Artists. Well, finally, after endless years of infomercials, all advertising things you don’t really need, there is something for the ultimate Downton Abbey fan, as compiled by Mr. Carson, the butler. You know Carson. He’s in charge of the pantry, wine cellar and dining room, and the male staff report to him. Carson has worked at Downton Abbey since he became the Second Footman at the age of 19.

As part of the song-and-dance double act called, The Cheerful Charlies, he is also endlessly nostalgic for the way things were, so what better qualifies him to bring you A Very Carson Christmas. Advertised several years ago on the Friday with Jonathan Ross program, this will, once again, quickly become THE go-to Christmas CD for the coming year, right up there with David Bowie and Bing Crosby singing, “Little Drummer Boy”! I wonder if Mrs. Hughes knows about this side of Carson….