At Downton Abbey, it’s Mr. Carson’s dream to become the Abbey’s Santa Claus. This year will be difficult as he will have to fight off stiff competition from some unlikely individuals. Unfortunately, for Carson, there’s no Mr. Molesley, no Nanny West or, for obvious reasons, no Mr. Green. Lord Grantham definitely has a tough decision ahead of him this year even with George Clooney probably doing more harm than good to elevate his chances after last year…. 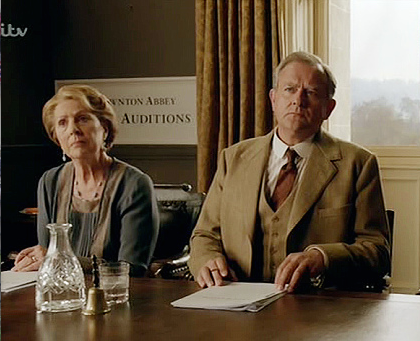 This time around, he is up against the likes of Sir Bruce Forsyth, Gordon Ramsay, Gok Wan, Brenda Blethyn as Vera, Jim Broadbent, Michelle Keegan and Warwick Davis who are all vying for this coveted position.

The annual competition was part of the overall ITV effort, Text Santa Christmas Jumper Day, which broadcast last night on ITV. The annual charity appeal is aimed at giving hope at Christmas by raising money and awareness for selected UK charities and causes. Last nights efforts saw Text Santa raise the highest total ever at £8,383,361.