I physically lost count long ago as to the actual number of reasons that living in the UK holds so much appeal. Aside from just the shear historical brilliance of London, now you can add the greatness of the London Underground to the ever-growing list and not just for the fact that the public transport system can virtually render the need for having a car pointless in getting around London. Now you can add their inventive way of dealing with fare-dodgers to the mix. 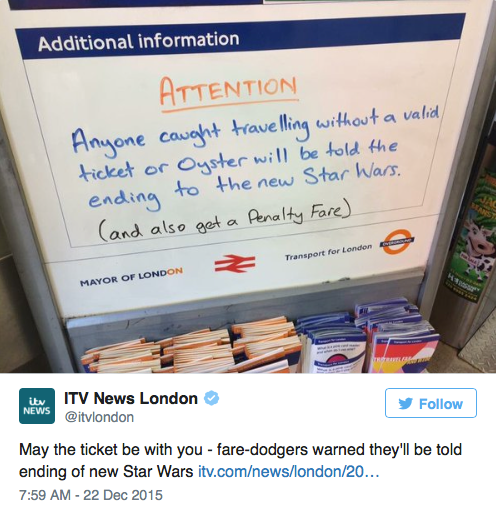 For those that thought they had successfully dodged both the London Underground fares AND the over abundance of spoilers for Star Wars: The Force Awakens that are currently circling the Internets, Transport for London had other plans for you. Recognizing that the threat holds such power for some people, the company has vowed to spoil the movie’s ending to anyone traveling on the London Underground without a ticket.

The warning, which was posted at various stations including Canonbury (as seen above) and Earl’s Court, stated that “anyone caught travelling without a valid ticket or Oyster will be told the ending to the new Star Wars“. And, if that wasn’t enough, for good measure, fare-dodgers would “…also get a Penalty Fare“.

You have been warned….