The series, Death in Paradise, is now, officially, the poster child for both how and why British television is superior to American television. In years past, it has been Spooks (MI5) or New Tricks showing the ability to completely overhaul your principle cast and still achieve the level of quality expected week in and week out which is a true testament to the creative team both in front of and behind the camera.

In each of the earlier two series, whether it was the departure of Tom Quinn, Adam Carter or Ros Myers in Spooks or James Bolam, Alun Armstrong, Denis Waterman and Amanda Redman in New Tricks there was a tendency to be a bit skeptical when there was a major cast change. Most American television networks would just end a series rather than even consider a major cast adjustment. Not so in the UK.

Now, with Death in Paradise entering into its 5th series, you have a show that, over the course of the last two series, will have lost three of its four main characters, including one that the initial series concept was built around in DI Richard Poole, played by Ben Miller. In addition to Miller, Sara Martins (Camille Borday) and Gary Carr (Fidel Best) have now also departed the island. Thankfully, Danny John-Jules was able to find time to juggle his policing duties on the island of Saint-Marie in addition to his role as Cat in Red Dwarf.

As was the case with both Spooks and New Tricks, the DIP creator/writing team found ideal replacements, some being polar opposite from the original character, such as Kris Marshall who joined Death in Paradise at the beginning of series three when Ben Miller decided to leave for personal reasons.  Rather than just have DI Poole ‘return to London’, DIP writers decided that he should be voted off the island in a most unappealing way.

Josephine Jobert appeared on the scene at the beginning of series 4 last year as DS Florence Cassell following the departure of Gary Carr with Tobi Bakare added as the newest member of the Saint-Marie police force, JP Hooper. Sara Martins character, DS Camille Borday, left the series mid-series 4 for a new job in Paris. 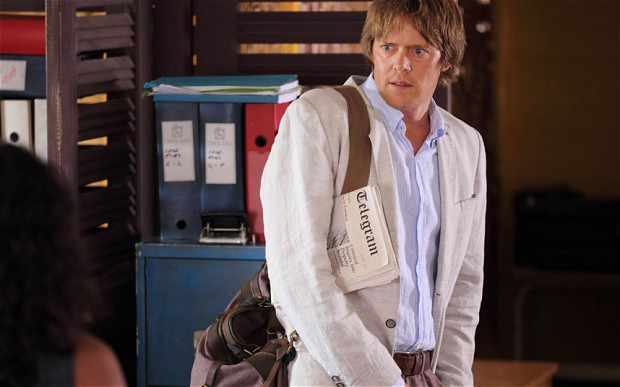 Just why is Saint-Marie a ‘paradise’?

In the series 5 premiere, which is set for Thursday, 7 January 2016 at 2100 on BBC1, DI Humphrey Goodman (Kris Marshall) and his team are, once again, tested when a millionaire philanthropist is murdered on his boat, and the only suspects were all underwater at the time. Meanwhile, DI Goodman’s new hobby raises a few eyebrows. One really has to begin to wonder why this tiny idyllic Caribbean island of Saint-Marie is called paradise when it seems like an awful lot of murders take place there in a short period of time.

Series 5 of Death in Paradise returns Thursday, 7 January 2016 at 2100 on BBC1. Series 5 will be available in the States on public television stations beginning April 2016.