Although the actual event was a bit anti-climatic, now that Mr. Carson and Mrs. Hughes have actually walked down the aisle, we can actually begin to focus on a few other Anglophile bits and bobs. Anti-climatic only in the sense that it took the better part of three episodes to determine if they were going to celebrate at Downton or the local schoolhouse. I guess the less time spent on the actual wedding and reception, the more time to watch Spratt and Denker go at it.

At least Cora finally came to her senses and realized the error of her ways and gave Mrs. Hughes a coat to wear! Now that they are definitely Mr. and Mrs. Carson, we turn our attention to James Corden and Adele. My guess is that unless you have had your internet privileges revoked recently, you have probably seen the Carpool Karaoke video with Late Late Show host, James Corden, and Adele. What you may be wondering is just how they did it? 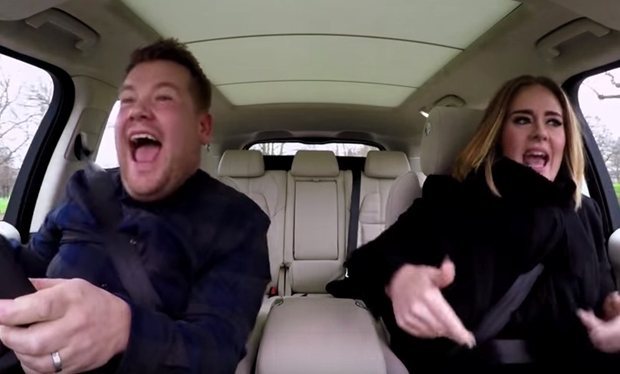 Vulture recently caught up with Late Late Show executive producer Ben Winston who shed a bit of light on just how this all came about. The Kodak moment segment was shot in December when Corden was home for the holidays in London and has now reached over 40 million views online in just a few days.

According to Winston, this was definitely not one of those ‘these are professionals, do not try this at home’ shoots. Lest you think this was in a studio with Corden and Adele sitting in a car in front of a green screen, this was filmed on the actual streets of London with the safety of the whole of Great Britain in mind.

I know, you have endless questions like “Is he really driving that car? Or is it on a trailer, while he pretends to turn and check his rear view mirrors? And if he is really driving, how is he interviewing music royalty AND singing at the same time, without crashing? What if someone cut him up, or he had some tricky manoeuvring to do? Isn’t it dangerous? Couldn’t he get in an accident? Is it legal?”

As Winston confessed to Vulture, “First of all, we don’t take routes that are difficult. He’s also got two of our cars ahead of him, and three cars behind him — essentially, a convoy. So he’s moving at under 20 miles an hour, and we don’t let any other cars around him. The second thing is, the cameras are tiny. They’re about the size of your knuckle, and they’re [stuck on] the windshield. So it doesn’t really distract his view. That’s how we do it.” Simple, huh?

I don’t know about you but the impromptu rendition of “Wannabe” by the Spice Girls was worth the price of admission. If this wasn’t enough to make you a Carpool Karaoke fan, rumor is, Elton John is on the books for the next installment which will air after the Super Bowl on 7 February 2016.