It was bad enough that Slough had to endure David Brent and the Wernham Hogg Paper Company for so many years, now there’s a comet on an unavoidable collision course with Earth to contend with.

You, Me and the Apocalypse is about the last days of mankind. When the end of the world as we know it is announced, an unexpected chain of events are set in motion. Mathew Baynton (Horrible Histories, Spy, Yonderland and The Wrong Mans),  Jenna Fischer (The Office), Megan Mullally (Will & Grace) and Rob Lowe (Parks and Recreation) make up an eclectic group of seemingly unconnected characters whose lives intersect in the most unexpected ways given the fact that apocalyptic chaos is happening all around them. 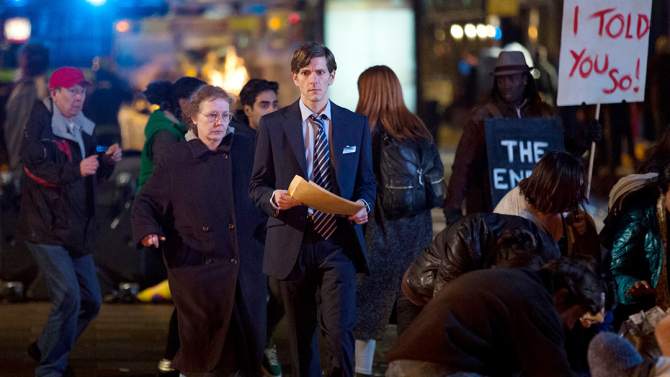 YOU, ME AND THE APOCALYPSE — “Who Are These People?” Episode 101 — Pictured: Matthew Baynton as Jamie Winton — (Photo by: Ed Miller/WTTV Productions Limited)

It seems as though there are only 34 days until the comet collides with Earth, and some of these misfits are destined to make it to a bunker deep beneath the English suburbs of Slough. In what sounds like the beginning of a bad joke, (A priest, a convict and a bank manager walk into a bar…”), these three threaten to become the totally unsuitable future of mankind.

The story follows an unusual assortment of mismatched characters, each coping with the impending end of the world in his or her own bizarre way. Perhaps the most complex is Father Jude (Lowe), a rebellious and foul-mouthed priest who is tasked with being the ‘devil’s advocate’ with the aid of his new timid assistant, Sister Celine Leonti (Gaia Scodellaro, Cugino e Cugino).

Rhonda (Fischer), a mild-mannered librarian, finds herself dangerously out of her depth when she is sent to a maximum-security prison for a crime she did not commit. She unwillingly befriends Leanne (Mullally), an unhinged white supremacist who takes a deeply reluctant Rhonda under her wing. Morally dubious, but intensely loyal, Leanne is a woman uniquely suited to surviving the end times and will prove herself to be exactly the sidekick Rhonda needs.

Then there is Jamie (Baynton), the humble bank manager from Slough who is hopelessly stuck in a rut and still in mourning over the mysterious disappearance of his wife seven years ago. Spurred into action as a result of the impending apocalypse, he embarks on a perilous quest to find his loved one.