While I do feel obligated to label this with the customary ***Spoiler Alert*** heading, I think now that it has been almost a full week since last Sunday’s shocking turn of events on Downton Abbey we are safe to discuss amongst ourselves the events of Sunday, January 31, 2016. As social media will more than attest, the Internets were lit up on Sunday night as Downton Abbey fans across the land watched the culmination of weeks of discomfort suffered by Lord Grantham. That said, I’m not sure anyone was prepared for it to look like the sequel to The Exorcist, an episode of Game of Thrones or the newest Quentin Tarantino movie. 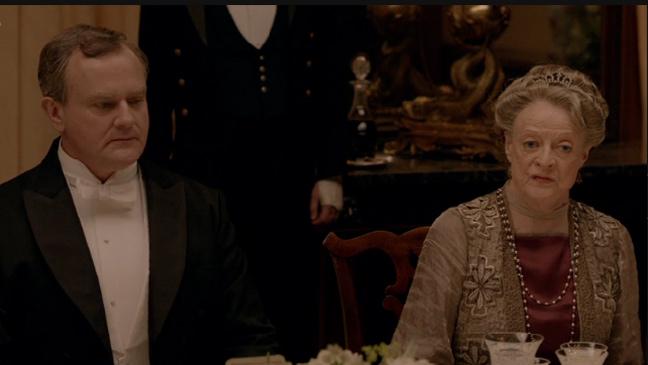 As the tensions between the Dowager Countess and Isobel have continued to mount during this sixth and final series, their war of words raged on and came to a head all in front of a dinner guest, the Minster of Health. Leave it to Lord Grantham to be clever enough to add a human touch into the equation to make sure viewers wouldn’t tire of the seemingly endless debate that, up to this point, was really no more of just a war of words without any visuals to support either side.

Downton Abbey Director Michael Engler told Yahoo TV, “There’s a long theoretical lead up about the changing of the hospital system and what it would mean to the community. The idea of something as sudden and shocking and real as what happens to Robert bringing it all into focus and taking it away from the theoretical into the emotional was a good way of reminding people what was at stake,” he says.

Historically famous for its dinner get together’s, last Sunday, most certainly, was the most memorable dinner gathering at Downton in years, far surpassing the time Robert tossed Sarah Bunting out on her ear or the early tensions that arose when Robert and Mama could not deal with Tom Branson actually ‘eating upstairs’. Who knew that when Robert asked “Can’t we stop this beastly row?”, he actually had a plan to end the ongoing bickering! Knowing that there may still be one or two individuals that haven’t seen this episode yet, we’ll just leave it at that. Besides, no amount of pre-planning could possibly prepare you for what is about to happen if you haven’t seen the episode yet.

In the end, while Sam Peckinpah would have been proud with the way this scene played out, the most touching moment on the planet occurred between Robert and Cora was almost a throwaway line and most were still reeling from earlier events. If you missed it because your eyes were closed at this point, it’s definitely worth hitting rewind on the DVR and watching again and again.