Well, the genius that is Stephen Fry may have left Twitter, but he has still found time to welcome Tellyspotting to the UK this morning for the 2016 BBC Showcase! The English comedian, actor, writer, presenter, activist and self-professed tech geek has teamed up with Heathrow Airport to welcome weary travelers to the United Kingdom. With over 73 million passengers making their way through Heathrow annually, the purpose is to give arriving passengers a sense of British culture from the moment they touch down. Who better to turn to than Britain’s true national treasure, Stephen Fry. 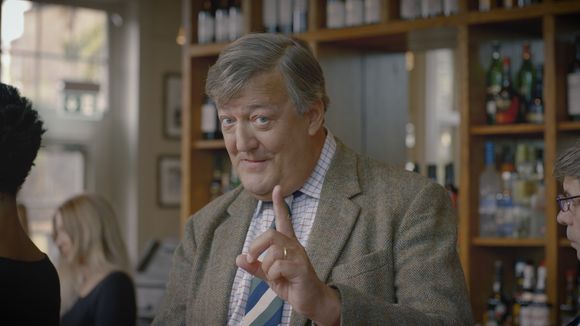 Mr. Fry is quick to point out two very important keys to understanding British culture. One,  “…91% of all verbal exchanges in the United Kingdom concern the weather” and, two, “We Brits love a queue… nevertheless if the queue should start to move particularly slowly then it may become necessary to turn to your companion and display your displeasure in the strongest possible terms.”

Safely in London as of this morning and headed to Liverpool for the annual BBC Showcase which brings together top buyers of BBC programming from around the world to screen the best of the best coming from the Beeb over the next year from comedy to drama and natural history to  factual. The BBC Showcase gives television buyers from across the globe the opportunity to get together and get a glimpse of what’s headed our way in the near future.

In years past, programs that we have had the good fortune to screen very early and that have ultimately made their way to PBS and public television stations have been Keeping Up Appearances, Vicar of Dibley, MI5, Hustle, More recently, series such as Father Brown, Death in Paradise, New Tricks, Wolf Hall, Call the Midwife and Sherlock were first screened well before making the long journey to American public television.

One can only hope that there is more of the same this year over the course of the next week of screenings. As always, we’ll update you daily as to what we find that will have a good chance of hitting American television in the not-too-distant future so check back often for all the telly news that’s fit to print.