The final night of the 2016 BBC Showcase was a sight to behold if you’re a fan of British crime drama and, in particular, police procedurals. Hoping to highlight their stellar line-up of talent both in front of and behind the camera along with the end result that we all know and love on the screen, the BBC pulled together a veritable who’s who of British crime drama talent for the final evening gathering with a stylish Crime Night at The Redrum Club. 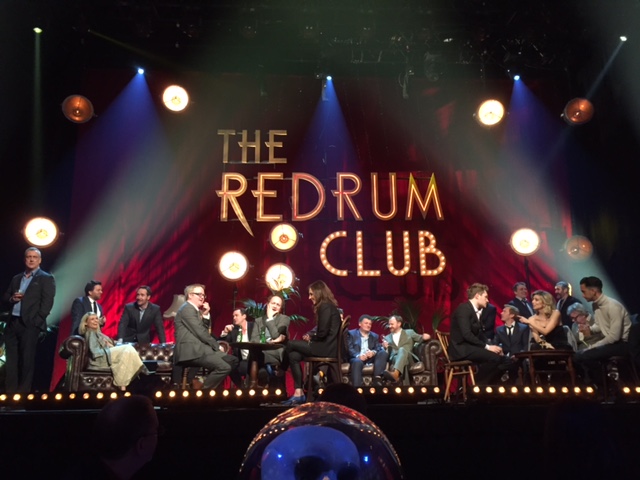 The sheer magnitude of the mind palaces on stage, all of whom later joined us for dinner, were immediately apparent with Stephen Tomkinson (DCI Banks), Matthew Macfadyen (Spooks, Ripper Street), Steven Moffat and Mark Gatiss (Sherlock, Doctor Who), Claire Goose and Matt Bardock (The Coroner), Sanjeev Bhaskar (Unforgotten), Philip Glenister (Life on Mars, Ashes to Ashes, Prey), Kris Marshall (Death in Paradise) and Mark Williams (Father Brown) among others.

Over the course of the evening, drop-dead stellar clips, set in the backdrop of The Redrum Club, reminded you of what continues to be the best television on television with trailers from Luther, Happy Valley, Sherlock, Orphan Black, DCI Banks and others. Of particular note with regards to Stephen Tomkinson’s effort to attend, he mentioned to us earlier in the day that a new set of DCI Banks were currently in production and, as a matter of fact, he let us in on a little secret that, earlier in the day, DCI Alan Banks (Tomkinson) had arrested two individuals before leaving the set to come to Liverpool. Now, THAT’S commitment. The good news on that front is that there will be a new series of DCI Banks headed our way in later in the year.

All in all, a great gathering of amazing talent to showcase some amazing telly. One thing was abundantly clear throughout the evening. Those in attendance that we have either come to know from their on-screen work or know of their work behind the camera are nicer than you can imagine from a willingness to talk about what they do.

Stay tuned for a laundry list of programming that will coming stateside in the not-too-distant future!