In America, ‘daytime dramas’ have always been called ‘soaps’ and largely said with a bit of a snicker when talking about them to others. More often than not, ‘soaps’ are considered guilty pleasures in the States where viewers find it difficult to admit that they know that Tracy Quartermaine’s life was saved by Dr. Marcus Byrne on General Hospital earlier that day. Or, that they find themselves tired at work because they were watching their DVR recording of The Young and the Restless past midnight the night before so they can find out if Victor would be heading back to jail. 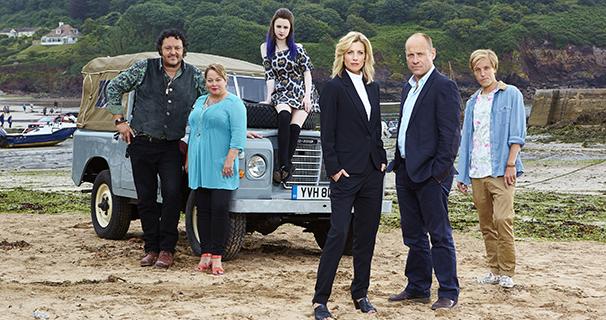 Not the case, however, in the UK with daytime drama, more often than not, standing up in quality to their older siblings funded out of the BBC primetime unit. This was never more clear than back in the Summer of 2014 when we spent two weeks in the northern Cotswolds on the set of Father Brown producing our behind-the-scenes public television program, Father Brown: Saving Souls, Solving Crimes, shot on location in Moreton-in-Marsh as they filmed several episodes in their third series.

The high standards of professionalism on both sides of the camera was clear from the outset and there was definitely a level of pride everyone took in making the most of what, in many instances, are much smaller budgets, limited crew and accelerated production schedules. Funded out of the daytime unit of the BBC, series such as Father Brown and the more recent series, The Coroner, are broadcast usually in the afternoons on BBC One while, in many cases, these series have deservedly found a primetime home on a number of public television stations across America. The are every bit as ambitious as their evening counterparts.

With Father Brown set to head into production on their 5th series this Spring, the relative new kid on the daytime drama block is The Coroner from creator/writer Sally Abbott (Eastenders, Casualty). Starring Claire Goose, Matt Bardock, Ivan Kaye, Beatie Edney and Grace Hogg-Robinson, the series is getting ready to go into production on the South Devon coast for their second set of ten programs.

The interesting thing about the series that are funded out of the daytime unit is that while budgets are smaller, you seem to be able to take more risks. Series like Casualty, Father Brown and The Coroner fly a bit under the radar which seems to give them more latitude to create compelling drama even with the smaller budgets.