Technically, while there are those that felt National Pi Day was more important last year (3.14.15), I’m going with the ‘statistically’ more accurate and significant celebration this year and 2016 as officially the best ‘National Pi Day’ ever. You see, if you round up 3.14159265359, you get 3.1416 or March 14, 2016. What would the celebration be without a trip to London’s oldest and most noted eel and pie house, Manzes – “The Home of Pie ‘n’ Mash”. The last time we had visited was in 2010 during a day off from filming our PBS special on the writers of British comedy. 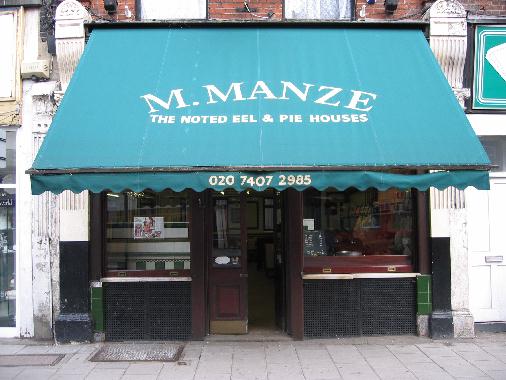 Above the “kitchen” on the wall are photos of various celebrities who have had a pie and mash over the years (not sure if they had the eel or not). Being from Texas, I was particularly attracted to the photo of Roy Orbison that was given the proud place next to the award for the “best pie and mash shop of 1995” given to Manzes by the Pie and Mash Club, Great Britain (didn’t know there was such a club did you). 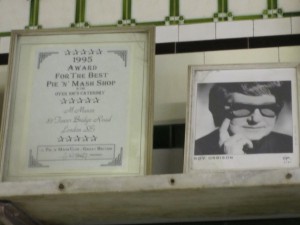 While there, we met Pierre, a freelance cameraman working on a Fox News piece on the dying breed of family run food establishments, like Manzes, who are still making a go of it today given the cuisine explosion in Britain the last several years. Since he had worked on several docs for PBS, he was very interested in what we were there shooting as we were very interested to hear about some other places he was going to shoot for his current assignment.