Aside from the fact that the BBC Sport Relief efforts happen to be one of the biggest fundraising events in the UK, it’s a country-wide effort to ‘get active, raise cash and change lives’ according to event organizers. If you are either outside of the UK or the one person within the UK that aren’t familiar with both the Sport Relief and Comic Relief (Red Nose Day) efforts, the one thing you can always count on is that countless numbers get involved from all walks of life to make a difference, raise an unbelievable sum of money and change lives.

Ok, two things you can count on. Great comedy/parody sketches by virtually the entire Who’s Who of British Television, Sport, Film, etc. While the 2011 Red Nose Day parody, Uptown Downstairs Abbey, from the genius minds of Jennifer Saunders and Joanna Lumley of  the PBS hit, Downton Abbey, still reigns supreme, the 2015 Sport Relief effort, once again, featured the greats in British telly who lent their time and talents for some brilliant bits. The best? Well, let’s just say that after all these years, we are finally introduced to the Luther family. 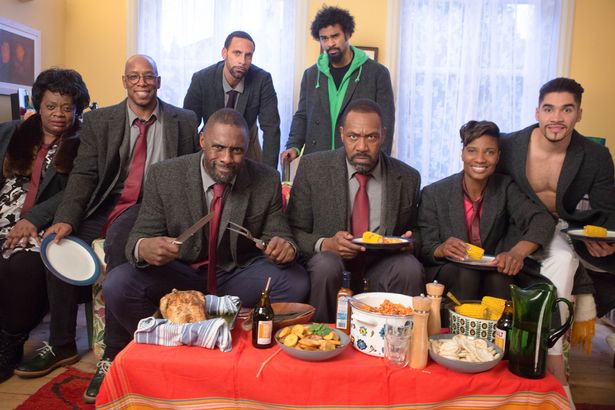 Not only do we finally meet the Luther family, but Alice Morgan returns in all her menacing greatness to kidnap Usain Bolt. “In a bit of a pickle are we John? Intimidated by close family members are we? I just want to be you John, running around solving major crimes while still having the time for casual affairs”, said the ruthless but oddly fascinating Alice, played brilliantly by Ruth Wilson.

The 2015 Red Nose Day broadcast brought in a staggering £80 million pounds while this years Sport Relief effort has already brought in just shy of £57 million pounds and still counting. Comic Relief, as an operating British charity, was created in 1985 by Richard Curtis and Lenny Henry. The amount raised by Comic Relief over the last 30 years totals more than £1 billion.