Armed with the thought that roughly 10 million people are going to be desperately searching for some quality British period drama to watch come January 2017, PBS has already planned out your Sunday nights television viewing when the mega-hit British period drama ’tis but a memory of January’s past. Jenna Coleman, who has spent the last several years jetting around the galaxy in a  blue police box that’s bigger on the inside in Doctor Who, stars as the young Queen Victoria, a neglected teenager who became Queen and eventually the most powerful woman in the world. 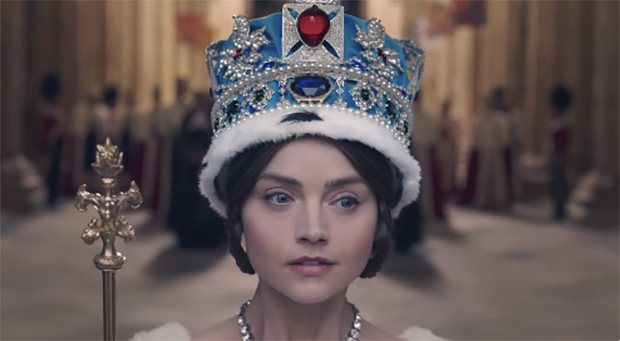 “I know that I am young, but I am ready for the great responsibility that lies before me,” the 18-year-old Victoria says. The eight-part drama follows her from the time she becomes queen in 1837 at the age of 18, through her courtship and marriage to Prince Albert. Famous for her candor and spirit, and for having had nine children, Victoria reigned 63 years, which made her England’s longest-serving monarch, until she got beat out by Elizabeth II in September 2015. The great thing about Victoria is that, as a series, it will have all the drama that the law allows and….it’s all true!

Look for Victoria later this year on ITV and in January 2017 on PBS in the coveted Downton Abbey slot on Sunday evenings at 9pET/8pCT.