Book your flights to Manchester. The streets are once again safe! The crime-fighting duo of Janet Scott and Rachel Bailey are back on the job for a new series of Scott & Bailey. The new series will see Janet, Rachel and the Syndicate 9 Major Incident Team tackle one of the biggest and darkest cases they have ever had to face…the Darknet, a place that offers complete anonymity to its users as they play a game in which one man challenges another to a murder, leaving a chalk mark at the scene as proof. The chalk images are then uploaded to a website thus passing the baton to the next killer. True to Scott & Bailey form, however, the case will have a devastating effect on their personal lives. Like they both need anything else to happen in that arena…. 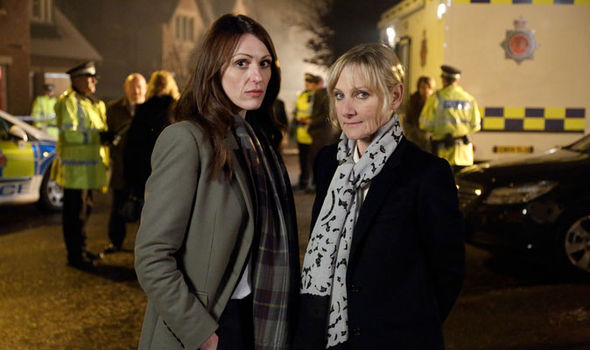 Suranne Jones and Lesley Sharp rekindle their crime-fighting partnership forged over four previous series with a fifth series of the brilliant police procedural. The three-part, single story line fifth series will open with D.C.I. Gill Murray, played by Amelia Bullmore, in retirement and the ever-ambitious Rachel (Jones) returning as the Acting Detective Inspector from her London stint in Vice full of new ideas and initiatives. While it is a bit difficult to be taken seriously, she’s desperate that she doesn’t become Godzilla: The Next Generation!

While not overly thrilled to be out of the disturbing world of Vice, she’s ready to take on what appears to be a terrifying Internet crime investigation of epic proportion. While appearing a bit unstable in the personal life category in the past, fortunately for the members of the Syndicate 9, Bailey has gained valuable experience and really wants to make her mark as she is reunited with her old partner, Janet Scott, this time around.

For this series, Jones, who conceived the idea for the original drama along with fellow actress Sally Lindsay who returns to the drama playing Rachel’s sister Alison, will co-executive produce with Nicola Shindler (Happy Valley, Ordinary Lies, Last Tango in Halifax), founder of the Red Production Company. It was Jones would brought the original idea to the brilliant talents of Sally Wainwright (Happy Valley, Last Tango in Halifax) who created the series.

Scott & Bailey 5 will transmit this Spring on ITV with a public television broadcast in the States not too far behind.