As cast and crew ready themselves to begin filming on series 6, the residents of Nonnatus House return to PBS beginning tonight for what promises to be the most gut-wrenching set of episodes so far. Having already dealt with the likes of domestic abuse, prostitution, infant mortality, homosexuality, racism, poverty and alcohol addiction through the first four series, series 5 readies itself to address its most difficult and/or boldest subject matter to date. Those of you who remember the series 4 finale will immediately understand the depths to which writer/creator Heidi Thomas is getting ready to take us. 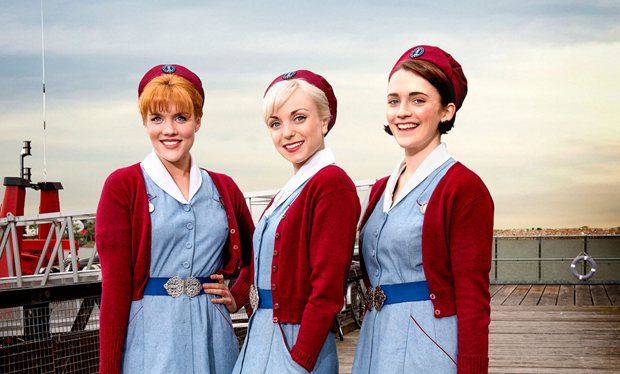 Several months removed from the Christmas special that ran on BBC One and PBS on Christmas Day, it’s now 1961 in Poplar as series 5 begins with Easter fast-approaching which, basically, means more work and more babies. One such delivery, however, brings with it its own set of shocks as the series deals with the devastating effects of thalidomide, the drug Dr Turner was seen prescribing at the end of series four for a mother suffering from a serious form of morning sickness called hyperemesis gravidarum.

When the baby is born with severe deformities, the mother refuses to reject her new-born child, the father struggles to come to terms with the harsh realities of his daughter’s problems. Support and intervention from Sister Mary Cynthia, Dr Turner and Shelagh proves invaluable as they try to rebuild this loving family. Known for its practice of never shying away from a difficult subject, the new series of Call the Midwife will not disappoint as ‘change’ will continue to be a major theme of the series.

Here, the cast of Call the Midwife discuss their thoughts on what lies ahead for those of us in America that are already camped in front of the telly waiting (im)patiently for tonight on PBS.

Considered by many as ‘the most gripping drama on television, ‘Call the Midwife S5 returns tonight at 8pET/7pCT on PBS.