From Laurence Olivier to Kenneth Branagh to Derek Jacobi to David Tennant to Benedict Cumberbatch, the role of Hamlet has attracted a veritable who’s who of British acting greatness the last half century. Most recently, at the National Theatre, Benedict Cumberbatch continued to showcase his considerable talents by taking on the title role last year in Shakespeare’s most powerful and influential tragedy, Hamlet.

Now, following in the footsteps of his fellow Sherlock co-star, Andrew Scott (Sherlock, Hollow Crown, Spectre) will tackle the iconic role at the Almeida Theatre in London’s West End beginning February 2017. Personally, I can’t wait to see the talents that brought such a maniacal portrayal of Moriarty to the screen in Sherlock apply his craft to Hamlet, Prince of Denmark. 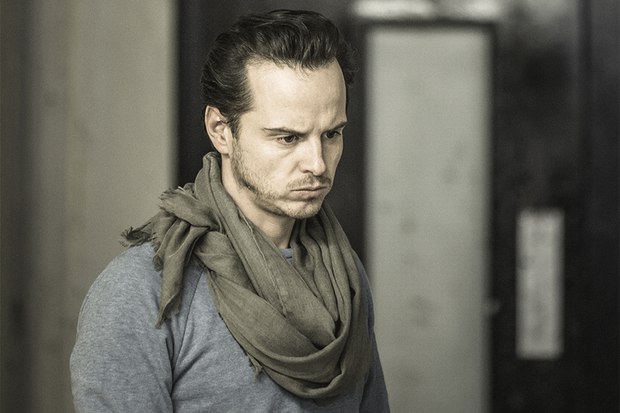 Before anyone tries to ‘do the math’ to see how this might affect the forthcoming series of Sherlock, all you have to do is access only a very small portion of the world’s most famous consulting detective’s mind palace and remember that filming should be getting ready to begin in the not-too-distant future and that there is still a tentative transmission timeframe on the table of early 2017.

Also, are we really sure Moriarty is coming back? That possibility, my friends, resides only in the mind palaces of co-creators/writers, Steven Moffat and Mark Gatiss. While it has always been the most difficult thing to fit in a bit of Sherlock filming in and around the insanely busy schedules of many on both sides of the camera, rest assured, they will all work this out and Sherlock will be headed our way before you know it.

In the meantime, here’s a look back at David Tennant’s modern dress portrayal of Hamlet from 2009 with Patrick Stewart as King Claudius.