Scott & Bailey returned to the telly last night courtesy of ITV for its 5th series. While it’s been a rather bumpy ride for Detective Constable Rachel Bailey (Suranne Jones) since her beginning days with the Syndicate Nine Major Incident Team, I always found myself pulling for her to catch a break, make even one right decision or skillfully dodge the next bullet from DCI Gill Murray, played brilliantly by Amelia Bullmore. For most of the first four series, however, it never seemed to quite work out for her and always at the expense of whatever relationship she found herself in. What seemed to always suffer the most was the relationship with her BFF police partner, Janet Scott (Lesley Sharp). 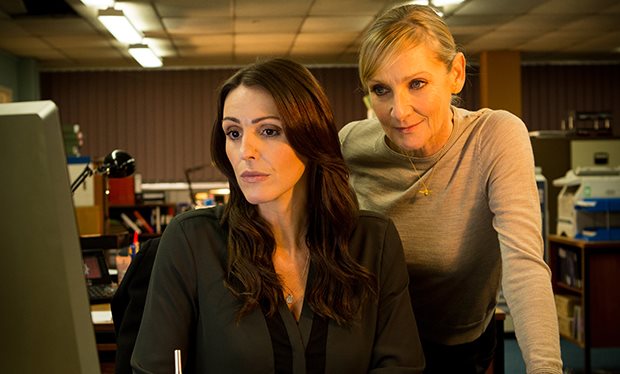 Without giving anything away, especially for public television viewers in America who haven’t seen the new series yet (it’s coming later this year, btw), let’s just say that it’s now Janet’s world that seems to be endlessly spinning out of control while it’s Rachel catching a break after a year working vice in London. It’s a more confident Rachel who returns to now head the Major Incident Team (MIT). Thankfully, both their professional chemistry and personal friendship seem to be on a much stronger footing once Janet’s obligatory ‘why didn’t you call me during your gap year when you were in vice’ was out of the way.ik

Rachel’s full-time job is now trying to keep the Syndicate 9 group together while convincing them to put their big kid pants on for their latest case. Unfortunately, the new series is comprised of only three programs but they are as tension filled as you can get as they tackle their darkest and most disturbing case yet trying to catch a murderous mastermind (or masterminds) hiding on the Dark Net who posts video footage of murders for sport. The good thing for long-time Scott & Bailey fans is that amidst all of this, the professional and personal drama between Rachel and Janet that we’re all accustomed to is still there. Even though creator Sally Wainwright has since departed, series 5 is better than the law allows.