ITV has announced that the current UK run of the fifth series of Scott & Bailey should now be referred to as the fifth and final series of the British police procedural. Series 5, which concludes on 27 April in the UK, will end a 5-year tension-filled run for Suranne Jones and Lesley Sharp as members of the Syndicate Nine Major Incident Team (MIT) of the fictional Manchester Metropolitan Police. 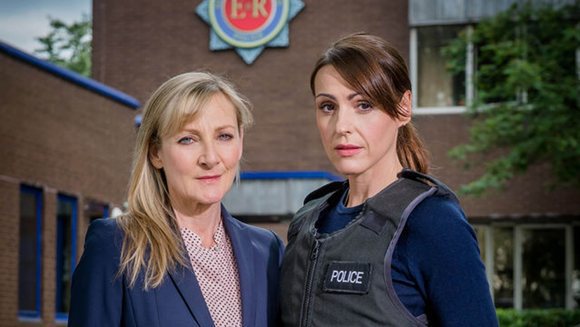 Based on an original idea by Jones and co-star Sally Lindsay, who plays Rachel’s sister Alison, the BAFTA-nominated drama stars Jones and Sharp as partners DI Rachel Bailey and DC Janet Scott​, respectively. It was Jones, the Doctor Foster/A Touch of Cloth star, who felt the time was right back in 2010 for a series that featured women that weren’t a wife-of, sidekick-to, mother-of, mistress-to, etc, as Jones put it.

After the program was pitched to writer Sally Wainwright (Last Tango in Halifax, Happy Valley), she teamed up with Diane Taylor, a former Detective Inspector from Greater Manchester Police, to create the program, and the production expanded from Jones and Lindsay’s original concept. Early reviews were mixed with one critic even having the nerve to refer to the series as “Lewis with skirts”. All anyone has to do is watch the brilliant final moments of the last episode of series 3 with Nicola Walker to understand that this reviewer has no concept of what good telly is.

Scott & Bailey was one heck of a series. The final three-part, one story series concludes 27 April on ITV and will premiere on a number of public television stations later this year.