Peep Show star and one-half of the comedy duo of Mitchell and Webb, David Mitchell, stars as William Shakespeare in a new 6-part BBC2 sitcom written and produced by Ben Elton (The Young Ones, Blackadder, The Thin Blue Line). Focusing on the playwright’s life before he became famous, the storyline for Upstart Crow, revolves around Shakespeare’s personal and professional life and the rather surprising stories of where many of his ideas came from including his unlikely inspiration for Romeo. 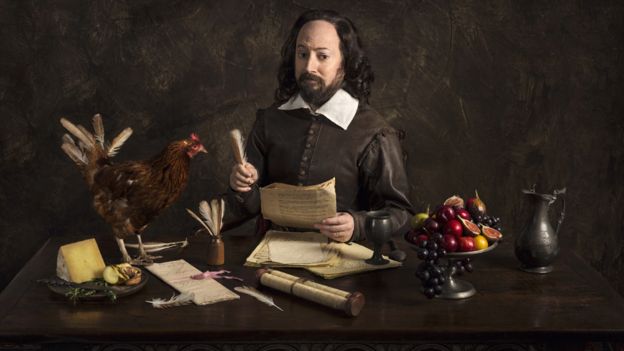 The sitcom’s title, Upstart Crow, comes from a 1592 pamphlet credited to playwright Robert Greene penned back in 1592 which referred to Shakespeare as a writer without actually mentioning him by name. As the story goes, the pamphlet caused quite a stir for being critical of other playwrights.

The comment in Greene’s pamphlet, Groats-worth of Witte, references an ‘upstart crow beautified with our feathers’ and is generally accepted as a reference to Shakespeare, who not only stole ideas from others but is criticized as an actor who has the temerity to write plays. While the title of ‘Upstart Crow’ has been endlessly grabbed over the years by theatre companies, book shops, coffee shops and production studios, it has never found it’s way to a situation comedy until now.

Mitchell, a frequent guest on a number of panel shows including QI, Mock the Week and Have I Got News for You, will also reunite with his comedy partner and Peep Show co-star, Robert Webb, for a new Channel 4 sitcom, Back, about a dysfunctional family running a pub in the not-too-distant future.