Widely considered a national treasure in Britain, Sir David Attenborough turns 90 years young today. The younger brother of director, producer and actor Richard Attenborough, who passed away in 2014, David Attenborough spent his early life training for his seven decades of work with and for the BBC by spending his early childhood collecting fossils, stones and other natural specimens. 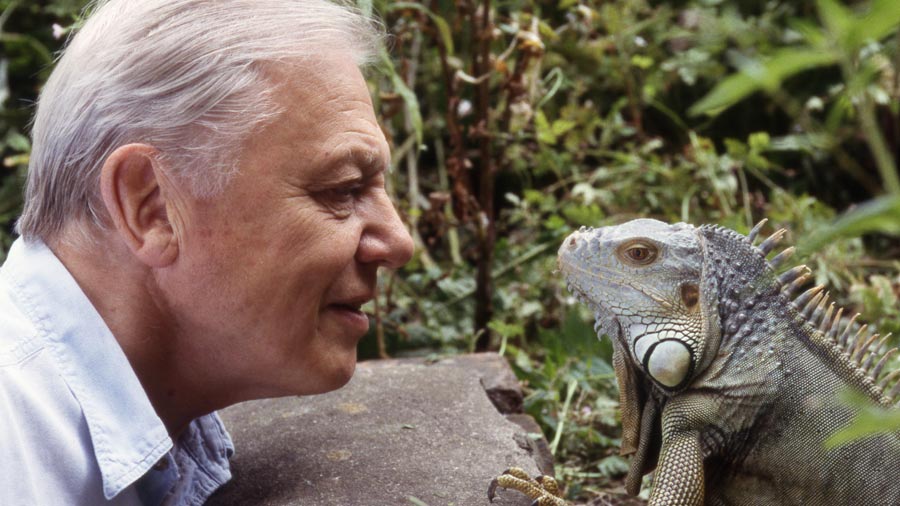 Two early childhood experiences gave rise to his natural history and conservation obsession when, at age 10, David and brother Richard attended a lecture by Grey Owl. According to Richard, was “…bowled over by the man’s determination to save the beaver, by his profound knowledge of the flora and fauna of the Canadian wilderness and by his warnings of ecological disaster should the delicate balance between them be destroyed. The idea that mankind was endangering nature by recklessly despoiling and plundering its riches was unheard of at the time, but it is one that has remained part of Dave’s own credo to this day.”

A few years later, one of his adoptive sisters gave him a piece of amber filled with prehistoric creatures; some 50 years later, it would be the focus of his 2004 documentary, The Amber Time Machine. To celebrate his 90 years and seven decades of brilliance, the broadcaster and naturalist has personally selected four programs from his vast back catalog, his ‘passion projects’, that will be broadcast on BBC2 with two programs last night and two this coming Saturday night.

In case you’re wondering, Sir David’s four picks are his 2000 documentary, The Lost Gods of Easter Island, A Blank on the Map from 1971, Charles Darwin and the Tree of Life fro 2009 and Lost Worlds, Vanished Lives from 1989.

Attenborough’s most recent collaboration with the BBC Natural History Unit was to introduce and narrate the Unit’s first 4K production, Life Story. On 22 February 2016, the BBC announced Planet Earth II, the sequel to the 2006 television series which was the first BBC wildlife series shot in HD, with Attenborough to return as narrator and presenter.

On 6 May 2016, it was announced that a new research vessel named RRS Sir David Attenborough will be built in 2017 which will enter service in 2019.

Happy 90th, Sir David Attenborough. Thank you for your seven decades of brilliant work that has been enjoyed by hundreds of millions around the world.