Best known for playing alongside Peter Sellers in the Pink Panther films, Burt Kwouk has passed away at the age of 85. While his international fame came from his recurring role as Inspector Clouseau’s sidekick, Cato, in the Pink Panther films from 1975-1993, Kwouk was a small-screen fixture from 2002-2010 starring as electrical and mechanical engineer Entwistle in Last Of The Summer Wine.

So popular was his character of Entwistle, that for series 30 and 31, he became the second man (officially taking over from Norman Clegg) in a new trio when Hobbo (Russ Abbot) arrived and recruited Alvin (Brian Murphy) and Entwistle to form a band of volunteers to respond to emergencies in the village until the series 2010 conclusion.

One of our great good fortunes in producing a number of specials for PBS involved heading out to the town of Holmfirth in West Yorkshire, England to interview Frank Thornton (Herbert “Truly” Truelove) and series creator/writer, Roy Clarke for our Funny Blokes of British Comedy PBS special. Clarke wrote every episode of the world’s longest running sitcom, which ran for 31 series and 295 episodes. 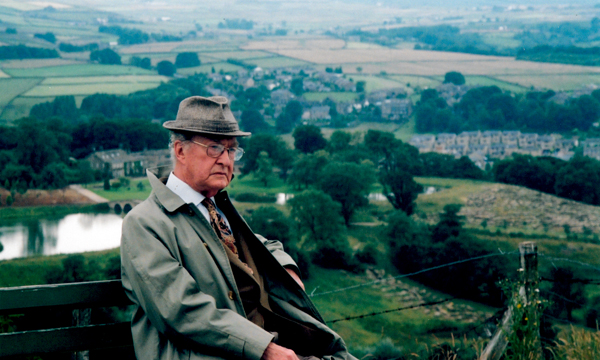 It was late June/early July of 2003 when Frank took us on a walking tour of Holmfirth past Sid’s Cafe and through the town that was home to LOTSW for 37 years. As we left the hotel, in the lobby was a very recognizable individual glued to the telly watching Wimbledon. Once introduced, we knew we were in the company of greatness. That very gracious gentleman was Burt Kwouk. Biggest regret was not having a cellphone handy to capture the moment. Kwouk’s LOTSW career began in 2002 where he appeared in series 24 through 31 with his last episode being, “How Not to Cry at Weddings” in August 2010.

Kwouk’s small screen career began with a 1957 appearance on Hancock’s Half Hour. One little know fact from Kwouk’s past. He was the Asian V/O announcer for the trailer for Monty Python & the Holy Grail  when it was released in 1975.