Aidan Turner (Mitchell, the vampire), Russell Tovey (George, the werewolf) and Lenora Crichlow (Annie, the insecure Ghost), the original cast of the BBC3 supernatural series Being Human, recently revealed at the MCM comic-con in London that they’d be open to a return despite all having left before the show ended. After all, in a show filled with ghosts, zombies and vampires why would you let a little detail like the deaths of their respective characters rule out a possible return? 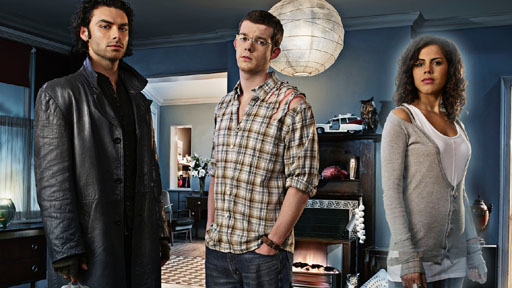 You’ll immediately recognize Turner from Poldark and Lenora from Doctor Who. Tovey will be a familiar face to public television viewers from the Emmy Award-winning series, Little Dorrit in addition to Doctor Who, Ashes to Ashes, the Agatha Christie Miss Marple series and from the “Hounds of Baskerville” episode of Sherlock.

The three stars even had some fun with their own thoughts as to how the Being Human band might get back together with Tovey and Crichlow suggesting a possible Christmas special in either heaven or hell. Who knows, maybe they’ll cross paths with Alex, Hal and Tom before it’s over! Just steer clear of Phil Davis if you see him coming…

If you’re not familiar with Being Human, it’s not quite the Gavin and Stacey boy meets girl story that seems to populate much of British television these days. When you first hear the premise of Being Human, that being one of “ok, a group of twenty-somethings share a flat in Bristol and try to pass themselves off as ‘normal’, and, oh yeah, one’s a vampire, one’s a werewolf and the third one’s a ghost”, it sounds like another pitch right out of the movie, The Player. Being ‘human’ is hard enough for the average individual. Imagine how difficult it is for your average vampire, ghost and/or werewolf.

Looking for a binge-watch this holiday weekend? Steer way clear of the American version and head right to the BBC 3 version for some really good telly. Being Human isn’t ‘guilty pleasure’ telly. It’s just top-notch telly. I would so love for this to happen. How about you?