221b Baker Street might just be the most famous address in the world (next to 10 Downing Street, of course), but Bristol also deserves to be in the address book of Sherlock fans. With the Summer travel season in full swing, what better place to head out to than Bristol to catch a glimpse of some of your favorite filming locations.

While Cardiff has experienced a pretty healthy growth in location filming over the last several years, Bristol continues to be a hotbed for production filming with some of the most brilliant programs currently on television calling Bristol ‘home’. 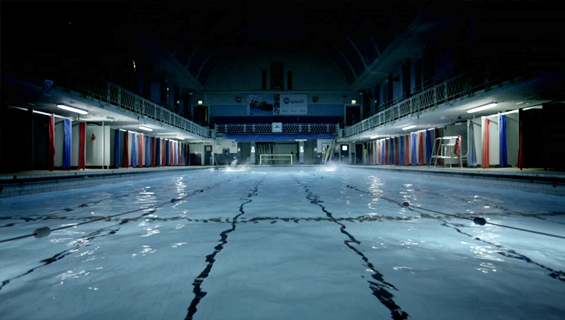 In years past, fans of Being Human could walk in the footsteps of Mitchell, George and Annie. Now, you can follow in Sherlock and John’s footsteps by visiting the numerous Bristol locations used throughout the series thanks to a great new Sherlock Bristol Locations Trail map. The Bristol Film Office has mapped out virtually all the main locations so fans can follow in Sherlock’s footsteps that you can download the PDF here. Not to worry as they are all within a 3km radius of the city centre and most can be reached on foot. 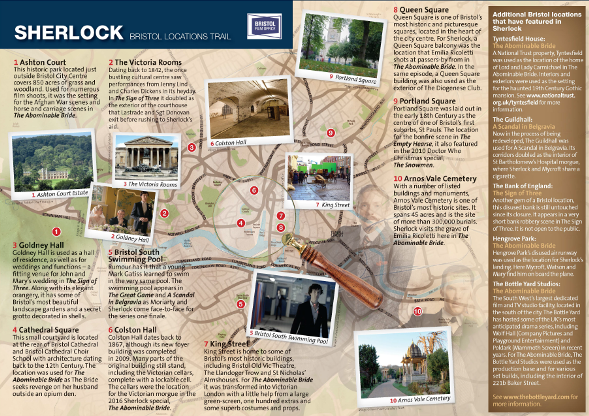 Many of the series’ most memorable scenes have been filmed at Bristol locations including the Guy Fawkes bonfire scene (filmed in Portland Square) in The Empty Hearse (series 3), John and Mary’s wedding in The Sign of Three (series 3) and numerous sections from The Abominable Bride were all filmed in Bristol.

Ever since the standoff of all standoffs in the first episode of series 2, “A Scandal in Belgravia”, when Benedict Cumberbatch’s Holmes came face-to-face with Moriarty in Bristol South Swimming Pool, the city has boasted regular cameos.

The most recent effort from the Sherlock mind palace, “The Abominable Bride” showed off some of Bristol’s best-known sights, including historic Queen Square (where Emilia Ricoletti shot at passersby), 850-acre Ashton Court (the carriage scenes) and sprawling Arnos Vale Cemetery (where Sherlock visits Ricoletti’s grave). The Bristol Film Office has mapped out virtually all the main locations so fans can follow in Sherlock’s footsteps that you can download the PDF here. Not to worry as they are all within a 3km radius of the city centre and most can be reached on foot.

The Bristol Film Office obviously knows what they have. “Bristol has played host to the popular Sherlock series starring Benedict Cumberbatch and Martin Freeman since it began in 2010, and this walking trail will allow fans to explore the locations that have featured on screen including The Victoria Rooms, Bristol South Swimming Pool. Arnos Vale Cemetery and Portland Square, and embrace our filming heritage. We hope the trail will not only provide a fun & healthy way for people to follow in the footsteps of Sherlock and Watson, and discover the city, but also boost screen tourism and the local economy, said Natalie Moore from the Bristol Film Office.

As an added bonus, if you happen to head out for Bristol this Summer and check out Portland Square, know that this location was also used in the 2010 Doctor Who Christmas special, “The Snowmen”.  Safe travels!