A 1966 Dalek has sold for approximately £38,000 to a UK bidder after attracting bids from around the world in a recent film and TV memorabilia auction. A man from London bought the Dalek, beating bids from America, Australia, New Zealand and Belgium. The Dalek, which was seen in the 1966 film Daleks – Invasion Earth: 2150 AD, was among 67 items being sold. It was one of three given away by Sugar Puffs in a competition to tie in with the release of the film. 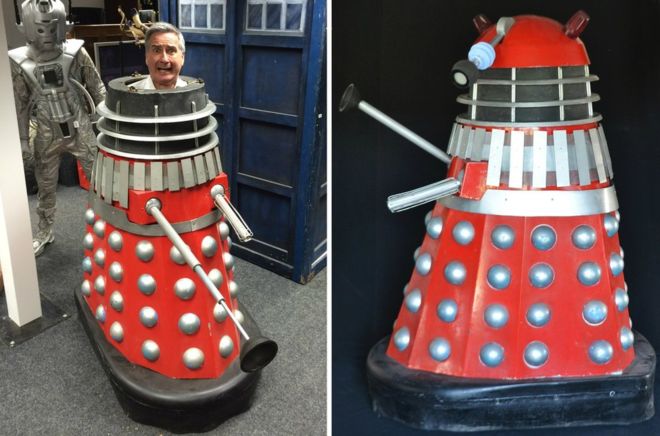 In 1992, following its’ 1966 film debut, the Dalek made an appearance on the BBC show Summer Scene, where it chased a young Rob Brydon around the Ebbw Vale Garden Festival of Wales.

People can get actually get inside the Dalek and move it around – as demonstrated in the above photo of BBC East Midlands Today‘s chief news reporter Quentin Rayner.

All of the items sold belonged to one man, whose wife said he needed to get rid of them so they could downsize. Before the auction, the seller’s wife said, “There’s no way that we can accommodate all of these things. The last thing I want is a Dalek in the bedroom. Everything has to go. We don’t want any of it back.“

The collection also included a Cyberman from the 19th series that sold for £2,000, and a Tardis from a stage show that fetched £1,000. The entire collection sold for almost £90,000. Now THAT’S what I call downsizing!