Fans of the hit BBC mystery/drama/comedy Death in Paradise will see a bit of a different look for series 6 as the Honore Police team will be leaving the idyllic, sun-soaked shores of Saint Marie for the very first time and heading to…London of all places. Tentatively targeted for a January 2017 broadcast on BBC 1, two episodes of the forthcoming new series will feature scenes both set and filmed in London as DI Humphrey Goodman (Kris Marshall) and DS Florence Cassell (Josephine Jobert) will be leaving the Caribbean island paradise with Officer Dwayne Myers (Danny John-Jules) in tow to solve one of the island’s most complex murder cases for a two-part special. 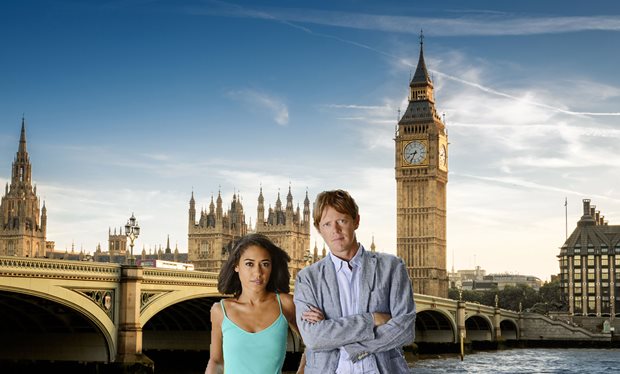 “We are very excited to be bringing Death In Paradise to London for the very first time,” says executive producer Tim Key. “Humphrey has always been a fish out of water in Saint Marie, adjusting to the island’s ways and customs, but for the scenes set in London, the roles are reversed as he is back in his hometown, giving an opportunity to explore the characters that viewers know and love against a new backdrop.”

The upcoming season will also see the return of Not Going Out star Sally Bretton as a series regular. Bretton first appeared in the the final episode of series five as Martha Lloyd, a potential love interest for Humphrey. She’s set to become a “prominent part” of series six, as sparks continue to fly between the pair. “My character is a joy to play and I can’t wait for viewers to see how her story unfolds,” teases Bretton.

While I do still occasionally miss the fish-out-of-water exploits of DI Poole along with DS Camille and Fidel, the current cast of Death in Paradise does a masterful job each week working so very hard on our behalf. After all, it is a five-and-a-half month a year effort to film the eight-part series on the French island of Guadeloupe, which transforms itself into Saint-Marie. For public television audiences in America that are getting settled in and ready to watch series 5 this Fall, here’s a brief look at what’s in store this season…

In case you are wondering just why Death in Paradise is still off-the-charts from an audience standpoint, Kris Marshall and Josephine Jobert offer this explanation.

Death in Paradise S6 returns to BBC1 in January 2017 with S5 hitting public television stations in American this Summer/Fall.