With the projected broadcast of the much steamier 2nd series of the 21st century BBC/PBS version of Poldark just around the corner in both the UK and U.S., in an attempt to get us collectively ready for the upcoming second series, we found a little gem of an interview with series historical advisor, Hannah Greig, over at austenprose.com as she spoke with them about how critical it is to get the historical details correct not only for Poldark but for British period drama in general. 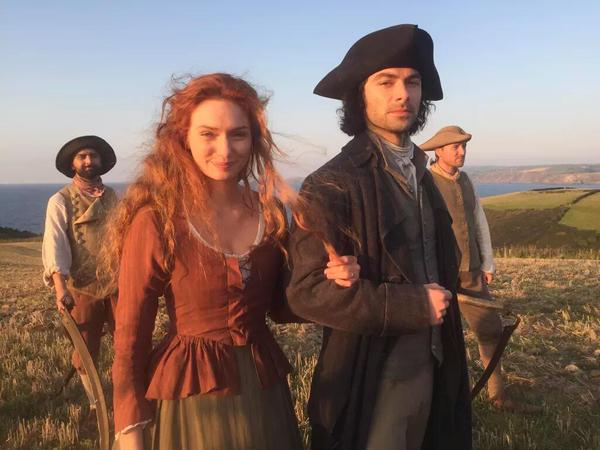 Knowing first hand the efforts that the production folks with the BBC’s Father Brown series went to to insure audiences and cast actually believed you were immersed in the 1950’s Cotswolds, one can only imagine the monumental task in front of the historical advisors for series like Downton Abbey and Poldark. The level of accuracy that the ‘historical oracle’ himself, Alastair Bruce, had to go through to transport the audience to not only the English countryside but also the city of London for a period of, roughly, 1912-1925 must have been a bit daunting.

It was really no different for Hannah Greig, the historical advisor on Poldark as she tells austenprose. Aside from the level of knowledge that someone like Greig would need to possess of the times, one would guess that having to create the belief for both actors and viewers that you were actually spending months in late eighteenth-century Cornwall is no small task.

Austenprose: Can you share with us what your duties are, what a typical day would be like, and what kind of questions are asked by the production team?

Hannah Greig: Historical advisers are more geek than glam! Before filming begins, I’ll check the script for anachronisms, write history crib notes, and tackle questions from the production team. These range from discussions about particular props to contextual information, like whether or not people in Cornwall would have been aware of events in America. If there is a bit of rehearsal time I’ll join the cast to run history-related Q&As. Normally I’ll turn up to a room full of people I’ve never met before but Poldark was a nice change because I’d worked with some of the cast and crew on Death Comes to Pemberley (Eliza Mellor, producer; Marianne Agertoft, costume designer; and Eleanor Tomlinson who played Georgiana Darcy before Demelza).

Coincidently I also knew Andrew Graham from my academic guise. He was master of Balliol College, Oxford, where I held a history post for a while (in fact he had interviewed me for the job). I’d last seen him at Balliol’s high table and I hadn’t known that he was Winston Graham’s son, so it was a lovely surprise to find him in the very different setting of the Poldark rehearsal room.

Once filming starts, the pace is frenetic for everyone else but calms down for me. By then it is too late and too disruptive to dish out history lessons (and I try to avoid being the stereotypical “hysterical adviser”). Although I love to see the eighteenth century come to life, I’m only any use to the production if there are big set pieces being filmed, like ball scenes or street scenes. If I am on location then you’ll probably find me begging a tour of the props trailer, which is like a curiosity cabinet stuffed full of exciting things.

If I am not on set then I am still on call for the duration of filming, and available on the phone for any last minute questions. I always check the schedule every morning to see what is happening so that I can give a quick answer if someone rings in a question. (Ralph Fiennes once called me unexpectedly from the set of The Duchess when I was in an Oxford supermarket – fortunately I managed to answer his questions whilst buying my milk).

AP: Captain Poldark returns home to Cornwall in 1783, a historically significant year for Great Britain. What was the economic, political and social atmosphere in the UK during this time, and how did it impact the Poldarks and other Cornish landed gentry?

HG: It is a time of marked economic, political and social change, the perfect setting for drama. Eighteenth-century Cornwall is particularly interesting. Its ports opened to a wider world but those routes were disrupted by wars. Its mineral reserves and fish stocks underpinned the regional economy, yet they had become increasingly scarce as the century progressed. The fact that Cornwall had 44 MPs at the end of the century reveals how incredibly important it had been as an economic and political unit for previous generations.

By then, however, such a disproportionately high number of MPs in a sparsely populated region was being cited as evidence that the political system was in dire need of reform. Outsiders saw Cornwall as unique. One traveller described Cornish miners as “a race distinct from others … governed by laws and customs almost exclusively their own.” It was a place that commanded loyalty and a defining sense of identity. Graham captures this masterfully in his books, and then Debbie Horsfield skillfully brings it all to life in vibrant scripts full of Georgian bon mots.

AP: Through the female characters of Elizabeth Poldark, Verity Poldark and Demelza Carne, we see the stifling social strictures placed on women in 1780’s England. Why would Elizabeth choose to marry a man she did not love, Verity become a servant in her own household and Demelza tolerate abuse from her father?

HG: These three characters encapsulate contrasting elements of Georgian womanhood. Heida Reed (Elizabeth), Ruby Bentall (Verity) and Eleanor Tomlinson (Demelza) do such a great job of capturing their complexities. Elizabeth and Verity’s stories are ones that might have interested Austen. Elizabeth wrestles between practical and passionate expectations. She has no idea that Ross would ever return from war. Francis is the viable alternative – young, attractive and heir to a substantial estate. On paper, what’s not to like? Ross is a far more dangerous prospect: a risk taker with an unpredictable disregard for social norms.

However, the choice that Elizabeth thinks she is making is not between Ross and Francis, but between a well-matched marriage and life as a single woman. Verity’s dependence on her male family members as benefactors reminds us how little power unmarried women had at the time. She can’t work and so her only hope for security is to be indispensable at home, a role threatened by her brother’s marriage because Elizabeth immediately outranks her as mistress of the house. Demelza’s story is the dream that would not have happened in reality. It would have been unthinkable for a gentleman to marry his kitchen maid (although it was an escapist fantasy that made Samuel Richardson’s eighteenth-century novel, Pamela, a best seller). For Demelza, it is not so much a question of tolerating abuse but rather of having no other options. Had she not met Ross so unexpectedly, what path might she have taken? Fortunately, we don’t need to worry about that because Ross – being Ross – defies all convention and marries her.

For the full interview with Hannah Greig, go to austenprose.com.