One of the first pics from the set of Sherlock 4 features Benedict Cumberbatch and, could it be, ‘Sherlock Bones’. Is it possible that this adorable canine companion is actually a new crime-fighting pooch that has signed on to assist both Sherlock and John Watson? On the surface this could be a subtle hint of a Sherlock 4 plot line or just another bit of evidence that series co-creators/writers, Steven Moffat and Mark Gatiss, continue to have more fun than the law allows. 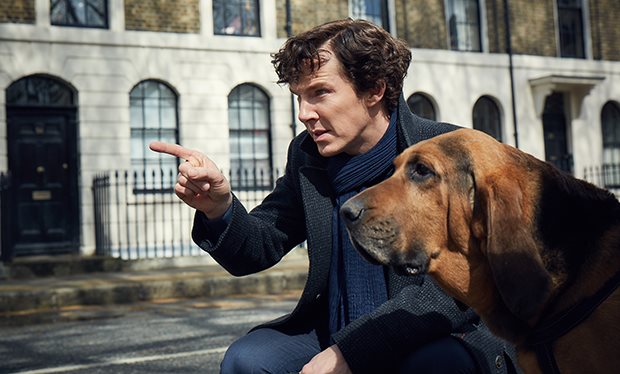 However, if truth be told, the inclusion of a dog comes directly from a classic Sherlock Holmes novel by Sir Arthur Conan Doyle. It could be giving us a clue what to expect from the new series which seems to be targeting a January 2017 premiere on BBC1 and PBS.

The second Holmes novel, “The Sign of the Four”, which is often retitled as “The Sign of Four”, there is a dog called Toby and is borrowed by Holmes from a Mr Sherman to track down two villains who are attempting to steal Indian treasure from Watson’s future wife Mary Morstan. Still with me?

Unfairly but accurately described as “…an ugly, long-haired, lop-eared creature, half spaniel and half lurcher, brown and white in colour, with a very clumsy, waddling gait,” in reality, Toby is a brilliant tracker who leads Holmes and Watson across London to eventually track down the bad guys, leading Holmes to sing his praises.

Fans of the 21st century Sherlock are well aware that plot elements from “The Sign of the Four” have already been used in the series 3 episode, “The Sign of Three”, including John and Mary’s wedding, and the inclusion of a character called Major Sholto. No Toby, however. The great thing about the three series of Sherlock so far is that both Moffat and Gatiss have pulled a number of elements from different episodes to try to find a balance of new twists while staying true to the Conan Doyle mysteries.

So, that said, even though we have not yet had the opportunity to see Toby show off his talents, it looks like he might finally get his day to show off his tracking ability come January 2017. Stay tuned!