According to THE source for all things Red Dwarf, we know that the long-awaited new episodes that comprise RDXI and RD XII are headed to Dave with the first six episodes beginning in September of this year. Given ‘Dave’ is the self-proclaimed ‘home for witty banter’, where else can it go (other than public television in the States in the not-too-distant future, of course).

Folks over at the official RD site have begun ‘sneak peaking’ some official pics on a regular basis leading up to the September premiere beginning with this ‘getting the band back together after four years’ pic of the crew of the inhabitants of Red Dwarf. 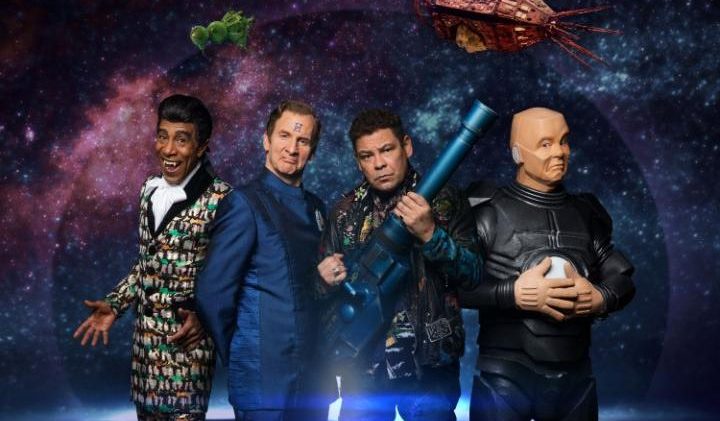 After a four year hiatus, Red Dwarf XI, the eleventh series of the legendary sci-fi comedy, reunites the original cast of Chris Barrie (Rimmer), Craig Charles (Lister), Danny John-Jules (Cat) and Robert Llewellyn (Kryten) along with a host of guest stars for a brand new series recorded in front of a live studio audience at Pinewood Studios.

While it’s common knowledge how much I love anything behind-the-scenes, this early storyboard pic released recently by @RedDwarfHQ is 50% fun and 50% cool. 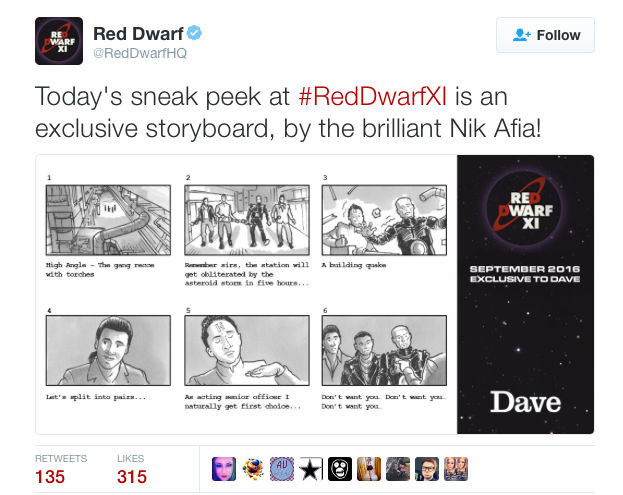 Moving past storyboards, we do know a bit about the show’s new six episode run. RDXI will see two of the Dwarfers dreams come true: Rimmer accidentally saves the life of a Space Corps Captain and is promoted to Officer, while Cat takes time off from being in love with himself to fall in love with a female Cat with a secret.

Meantime Lister wakes up to discover a deranged droid has stolen some of his body parts and Kryten has a mid-life crisis and considers leaving the Dwarfers for a younger crew. The gang also find themselves in an alternative America where modern technology is outlawed making both Kryten and Rimmer illegal.

Early on, Danny John-Jules, who plays Cat, told Digital Spy that Series XI will go back to its early series roots. He said: “It’s going back to the old school, the four guys and loads of banter. That’s what we want.” Then, Chris Barrie was quoted as saying that it will include an episode that involves four Krytens, hinting that all the cast could become robots.