Following up on yesterday’s news that the bicycle-riding, cardigan-wearing midwives of Nonnatus House are headed to Cape Town, South Africa to film the forthcoming 2016 holiday special comes news of a new cast addition for series 6. When the series returns in early 2017, Nonnatus House will be getting a new nun in the form of Dame Harriet Walter. The 65-year-old veteran actress is set to join the sixth series of the long-running period drama when it airs on BBC1 and PBS next year. She’ll play Sister Ursula, a character Walter describes as a “not very welcome addition” to the midwifery team. 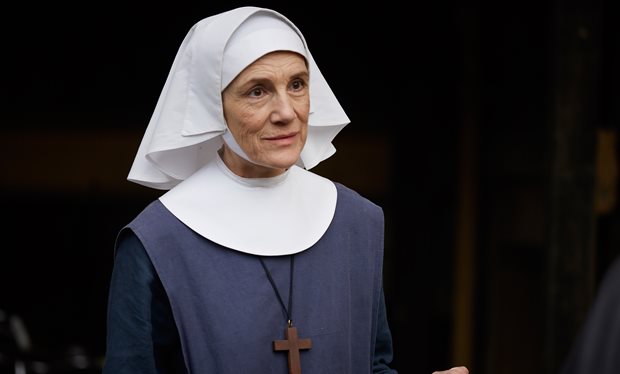 Dame Walter will join the cast after the departure of the much-loved character Sister Evangelina, played by Pam Ferris, who passed away at the end of season five. Walter is a prolific stage and film actress, best known for roles in Atonement, Sense and Sensibility, Downton Abbey (Lady Shackleton), London Spy, Little Dorrit and Star Wars: the Force Awakens. She’ll join the series when the residents of Nonnatus House return to the East End after a trip to South Africa during the festive special. Walter will star alongside Helen George, Charlotte Ritchie, Emerald Fennell, Jenny Agutter, Judy Parfitt and Miranda Hart, who is returning to the show after a recent hiatus. “As an actor I’ve been made to feel one of the family from the start,” says Walter of her new role.

Series 6 will be set in 1962, where the midwives will see “social revolution in the outside world… mirrored by change and challenge much closer to home. As they strive to help mothers and families cope with the demands of childbearing, disability, disease and social prejudice, our beloved medics must make choices – and fight battles – of their own.” “It’s back to earth with a bump for our beloved midwives as they return from their magical Christmas mission trip to South Africa. It is now 1962, and in a rapidly changing world, the arrival of Sister Ursula – superbly played by Dame Harriet Walter – brings new challenges to Nonnatus House,” writer Heidi Thomas told RadioTimes.com, adding: “Tears are shed, and bonds reinforced, as the team pull together as never before.”

Thomas went on to explain, “As the team settle back into Poplar after their South African adventure, we‘ll see them grappling with all the contradictions and opportunities of the early Sixties – the beacon of the Pill, the shadow of the Kray twins, the lure of independence and the call to duty. And time and time again, in a age of change and danger, we will be reminded of the simple power of love.”