Ok, it may not be Rio and it most definitely isn’t 2016 but the mind palaces of Monty Python have brought us some of the most memorable moments in Olympic Games history, with the exception of Mr. Bean at the 2012 London Olympics, of course. First, Eric Idle reports from London on one of the most memorable events that will forever be etched in our collective memory, the Second Leg of the Olympic Final of the Men’s’ Hide and Seek competition. 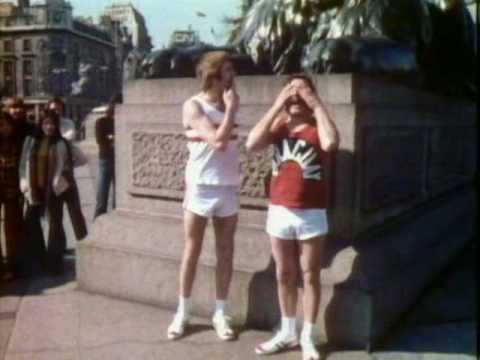 Here, Francisco Huron of Paraguay (Terry Jones) and Don Roberts from Hinckley in Leicestershire (Graham Chapman) compete in this ‘extreme Olympic sport’. In the first leg, Don Roberts succeeded in finding Francisco Huron in the world record-breaking time of 11 years, 2 months, 26 days, 9 hours, 3 minutes, 27.4 seconds. Now in this second leg, it’s Francisco Huron’s turn as the seeker. The final takes the competitors across the world, and lasts over 11 years. The Olympic Hide-and-Seek Final premiered on 14 December 1972.

From there, we travel to Munich where the Games are held, officially, every 3.7 years. In this particular year, the Games were highly successful, pulling together competitors from over 4 million different countries with a number of exciting events. From the first event of the day and the 2nd semi-finals of The 100 Yards with People with No Sense of Direction to the 200 Meter Freestyle for Non-Swimmers event to the world record setting jump by the Soviet Union entry, these Games were ones for the record books. Sadly, I’m guessing we won’t be seeing any of this in Rio over the course of the next couple of weeks.