Over the past several years, there seems to be a growing difference between the way series that air in both the UK and the U.S. are promoted to potential audiences. While series such as Call the Midwife, Downton Abbey, Lewis, Endeavour and, now Poldark have enjoyed both critical acclaim and audience success on the BBC, ITV and PBS, audiences see a bit of a different take on how the series will appeal to their respective audience in each country.

With Downton Abbey, ITV heavily promoted the ‘drama’ aspect of the series while PBS seemed to lean towards the ‘scandal’ that took place at Downton. With the forthcoming return of Poldark on 4 September on BBC1 and September 25 on PBS, the roles seem to be reversed. Interestingly, there are times that they seem like to completely different series.

The final episode of Poldark S1 saw Capt. Ross Poldark arrested after a ship was wrecked off the coast of his land, while he and Demelza (Eleanor Tomlinson) struggled to come to terms with the death of their child. 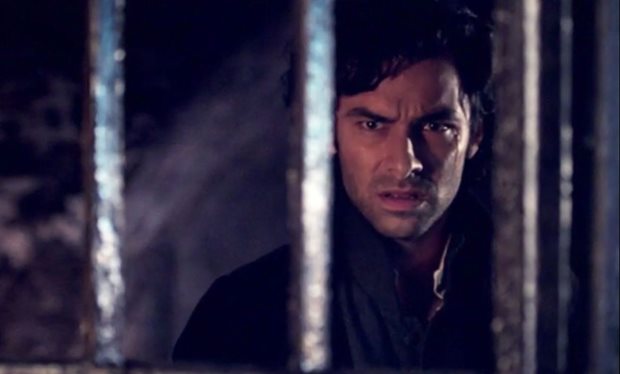 From a BBC promotional teaser perspective, there’s some serious trouble waiting for Capt Poldark in River City in the first look trailer from the BBC for Poldark S2. Aidan Turner has been fighting for liberty, hopes and dreams and he insists he’ll “keep on fighting, whatever the cost” in what is a much moodier teaser than for the same U.S. version. The price of his efforts, though, seem to be rather steep. He can be spotted atop a Cornish cliff in handcuffs being led away by soldiers and later through the dark bars of a prison cell.

Poldark S2 as promoted by BBC1 for 4 September premiere

But that’s not all for this visually stunning series. The PBS teaser seems to be focused a bit more on the drama angle than the action angle. Rest assured, however. The same tears, tarot cards, gun shots, sex, sunsets, screams and shackles are in the PBS version, it’s just a different take on how the same series is being sold to each individual audience.

Poldark S2 as promoted by PBS for September 25 premiere