Ever since season 1 of Poldark burst onto the scene after a four-decade hiatus, the focus has been on heartthrob co-stars Aidan Turner (Captain Ross Poldark) and Eleanor Tomlinson (Demelza). Now, as we approach series 2 this September, we now know the real star of the series is an Irish-born horse called Seamus. As Captain Ross Poldark’s trusty steed, Seamus is now so popular his owners are getting calls asking if he can take a break from the TV cameras to perform the honors at shop openings. Seamus’ growing fan base has even brought him the need to create his own Facebook page. FYI, it’s /SeamusofPoldark for those getting ready to hop over there right now to check it out. Just so you are aware, he doesn’t post much but still has around 1000 followers! 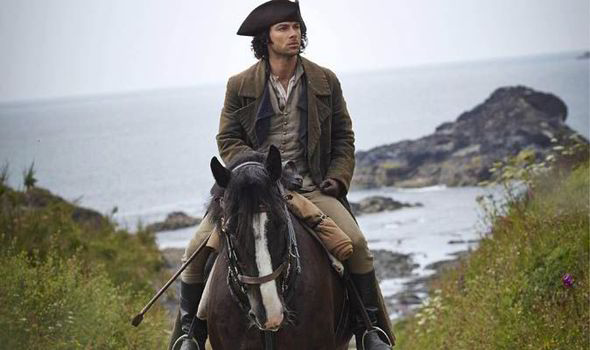 In fact, Seamus is deemed so important to the Poldark series by BBC bosses they insisted he had his own stunt double, a lookalike called Jonny Wilkinson. “Just like Aidan Turner had a stunt double for some scenes, you don’t take risks with your principal horse,” said Mark Atkinson, boss of Atkinson’s Action Horses, the East Yorkshire firm that provided 20 horses for the eight episodes in the first season. 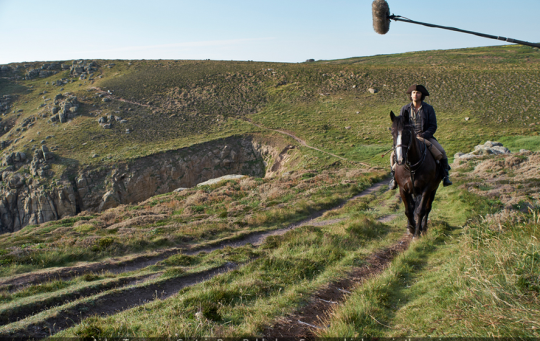 Seamus is quite unlike Robin Ellis’ horse in the original Poldark. In the first season of Poldark, back in the 1970s, a number of thoroughbred horses were used. This time the BBC wanted more authentic-looking animals. “They wanted the sort of horses that could have coped with life on the Cornish moors, so very strong ones with short legs”, said Atkinson, who immediately thought of Seamus. “He’s an old-fashioned Irish draught horse, about 16 hands high, really strong and well put together. He’s a real hardy, roughty-toughty sort of a horse. We chose him for Ross Poldark because the art department wanted a horse that was true to type that could cope well with the moors,” added Atkinson.

As it turns out, Poldark isn’t Seamus’ foray into the TV acting scene. His CV also boasts roles in Jamaica Inn, a TV version of Wuthering Heights and several war adaptations. Poldark, however, is the first starring role for the 14-year-old Irish-born horse.

Seamus (and Aidan Turner) return for the 2nd season of Poldark on September 4 (BBC) and September 25 (PBS).