In today’s overloaded commercial environment, no one gives it a second thought when they encounter celebrity spokespeople appearing in adverts for their favorite whatever. What doesn’t immediately come to mind are commercials that feature the character that an actor portrays. The only recent example that seems to follow this concept features the perfect pitchman, Modern Family‘s Phil Dunphy, in several ‘Phil’s-osophies” moments for the National Association of Realtors.

Back in the 90s, it seemed the new bright and shiny thing was to feature popular songs that were sold by artists and used in commercials. So much so, unfortunately, that when you heard the song on the radio, you immediately associated the song with the product it was hawking as opposed to the band or artist that performed the song. Guess that means they bought the right song. 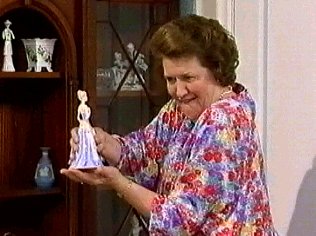 In the UK, however, our favorite social-climbing trendsetter Hyacinth Bucket (Patricia Routledge) appeared alongside her Keeping Up Appearances co-star, Josephine Tewson (Elizabeth), in an advert for “Second Chance UK”, an organization designed to help individuals improve their job skills. That was followed up several years later with Patricia Routledge as Hyacinth in a British Gas advert. Makes sense really that Hyacinth had a job on the side. I always wondered just how she could afford her beloved pearl-white slim line telephone with automatic redial on only poor Richard’s salary? Let’s not even discuss her full set of Royal Doulton china with the hand-painted periwinkles.