Fawlty Towers, the quintessential British sitcom and, perhaps, the best all-around television sitcom of all-time, is headed down under courtesy of series co-creator/writer, John Cleese. Uneasy about the reception the show might get from UK audiences and critics, more than 40 years after the original was aired on the BBC, Cleese has chosen an all-Australian cast for the live theater production, which opened in Sydney this past weekend for a 4-week run before going on to Melbourne, Adelaide, Perth, Brisbane and New Zealand. 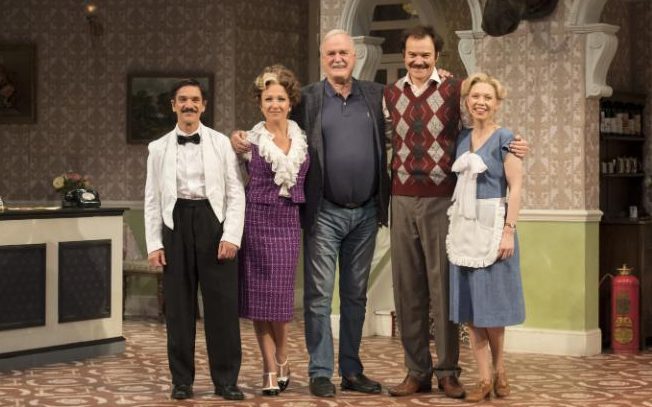 Because of the country’s optimistic outlook, Cleese is using the show’s tour of Australia as a test run before bringing his adaptation to the rest of the world. “I wasn’t sure it would work and I thought it would be embarrassing if it doesn’t,” Cleese said on Friday. Melbourne actor Stephen Hall has the unenviable task of  taking on role of Basil, while former Home and Away actress Blazey Best takes on the part of his long-suffering wife Sybil, originally played by Prunella Scales, with Aimee Horne as Polly and Syd Brisbane as Manuel.

In case you trying to figure out Cleese could possibly re-create the greatness that is Fawlty Towers in live theater, three classic episodes ‘The Germans’, ‘Basil The Rat’ and ‘Communication Problems’ have been woven together to create one play, featuring many of the favorite gags from the original TV series.

That said, audiences may be in for a bit of a surprise if, like me, you can quote the entire script for these three episodes backwards and in your sleep as Cleese has included plenty of new jokes to keep both die-hard fans and younger audiences happy. “I’ve written several jokes in there that I’m rather proud of that nobody knows weren’t in the original,” Cleese said.

While it’s definitely a gargantuan task ahead for Stephen Hall in playing the part of Basil with John Cleese right there in the wings, it might just work. The sets look spot on and early reviews are calling Hall’s Basil ‘fawltless’! I never thought I’d say this as it’s pretty impossible to re-create perfection, but I’d be up for seeing this if it goes beyond its current Aussie tour.