What better way to suppress a bit of Sherlock separation anxiety than a brilliant Sherlock parody from the mind palaces over at the Hillywood Show. While there have been numerous parodies over the past several years, this particular one from Hilly & Hannah Hindi includes fan favorite moments from actual Sherlock episodes. The comedy duo traveled to London to film in actual Sherlock locations from episodes including A Study in Pink, The Great Game, A Scandal in Belgravia and The Sign of Three. 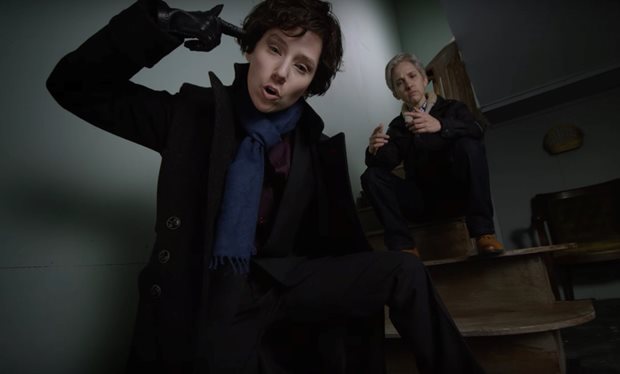 Make sure you stick around to the very end (not that you weren’t planning on it) and you will spot a special guest appearance from Sherlock co-creator Steven Moffat and his son Louis. No strangers to the parody world, sisters Hilly and Hannah Hindi have created some of the best there is when it comes to parodies. Their Doctor Who parody has almost 6 million views on YouTube and some of their other ‘must-see’ parodies include Supernatural and Lord of the Rings. With their parody of everyones favorite highly functioning sociopath, their trifecta of parodies (SuperWhoLock) is complete.

Sherlock parody – Behind the scenes

For those keeping score at home, the parody took 13 days to film and featured Osric Chau as Moriarty and Chris Rankin as Mycroft. As great a parody as this is, the sad reality is that it’s still an eternity until January 2017 and the return of Sherlock to BBC and PBS. Thankfully, we’re all in this together and with the help of continued mind palace brilliance like this, we can do it!