When the first official trailer arrived recently for the forthcoming series of Sherlock, it was abundantly clear that it isn’t a game any longer…for Sherlock and John, for the fans of the series and, definitely, not for co-creators/writers, Steven Moffat and Mark Gatiss. Judging from the trailer and, now, from the first official picture released from the set, it’s definitely “game on” as there is some definite 21st century intense brooding going on here. 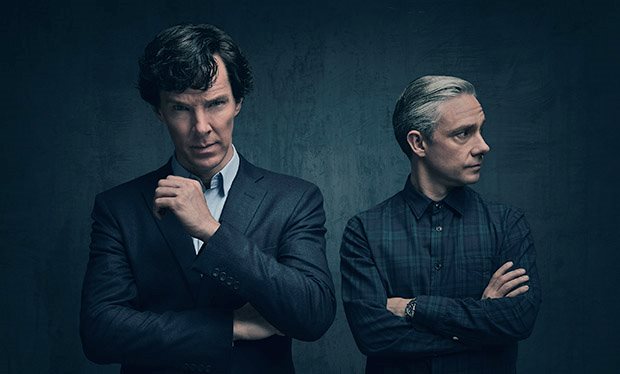 Following the roller coaster history of Sherlock has been fun over the past three plus seasons. First Sir Arthur Conan Doyle/Sherlock Holmes purists were incensed that anyone would even consider dragging Sherlock into the 21st century. How could anyone outside of Jeremy Brett play the world’s most famous consulting detective! Then, last New Years Day, came “The Abominable Bride” which found both Sherlock and John back in Victorian London…or were they?

While the special was nothing more than a brilliant holiday gift episode from Moffat and Gatiss, it did set some hardcore fans of the series’ hair on fire who just couldn’t handle Sherlock not living in the 21st century. So, with series 4, it looks like after almost 7 years, 3 series and one special, it like some serious ‘you-know-what’ is about to happen between the boys from 221B Baker Street, a possible return of Moriarty not to mention a new villain in the mix played by Toby Jones.

Unfortunately, in keeping with Sherlock history, the pic teases the heck out of all of us and really tells us very little about what’s in store come January 2017…but I’m cool with that. Okay, not really, but it does help with the separation anxiety if I keep saying this several times a day. History does tell us that this won’t be the last bit of torture to come our way from the mind palaces of Moffat and Gatiss when it comes to endless teasing up right up to the New Years Day premiere. If they would just hurry up and clarify this ‘third Holmes brother’ possibility, that will easily get me through the Autumn and ready for whatever New Years Day brings.