As BBC viewers head into their second week of Poldark S2, the return of series 2 is just around the corner in the U.S. on Sunday, September 25 as part of PBS’ Masterpiece series. For those few that remain ‘in the dark’ as to this bit of Cornwall brilliance starring Aidan Turner and Eleanor Tomlinson, you might find it somewhat difficult to binge watch series 1 over the course of the next two weeks as you collectively begin to jump on the Poldark bandwagon, you are going to need a bit of a catch-up, especially in the case of the roller coaster ride that is Ross and Demelza. 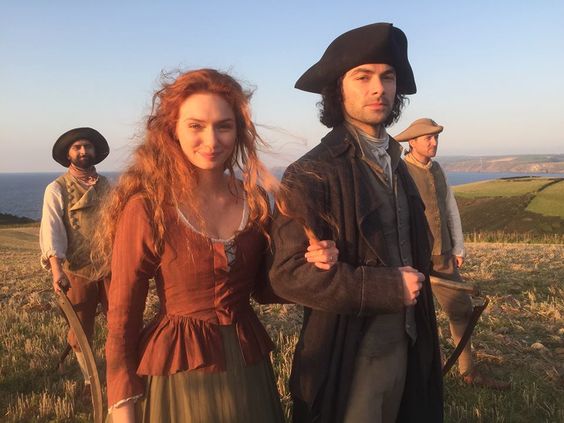 One thing you will immediately notice from the beginning is the increased feistiness of Demelza’s character when compared to the original 1940s Winston Graham novels upon which Poldark is adapted. In episode 1, Ross heads to market and comes across an urchin, Demelza Carne, being attacked by ruffians who want to steal her dog. In true Captain Ross fashion, Demelza is rescued much to the dismay of pretty much everyone living in 18th century Cornwall.

In Graham’s novels, which were written in the 40s and 50s, Demelza tends to be much more submissive as the series goes on. Debbie Horsfield, who adapted the screenplay from the novels by Winston Graham, has Demelza retain throughout the series the combative nature she exhibited when, as a lowly servant girl, she was rescued by Poldark. She does, however, make a mean pie, from what I hear.

Now your ready to meet Capt Ross and Demelza and then don’t forget to tune in to Masterpiece on PBS beginning Sunday, September 11 at 8p ET/7pCT for the return of Poldark!