Young Hyacinth premiered last week as part of the BBC’s Landmark Sitcom Season along with other ‘tip-of-the-hat’ specials including Goodnight Sweetheart, Porridge and Are You Being Served?. Having now had the opportunity to be able to screen all of them, I thought the Keeping Up Appearances prequel starring Kerry Howard worked exceptionally well. Even though the one-off was brilliantly written by original creator/writer, Roy Clarke, this was a herculean task placed on Howard’s shoulders given that Keeping Up Appearances is considered to be one of the BBC’s greatest sitcoms of the 90s and the most profitable one given it’s foreign sales, etc. 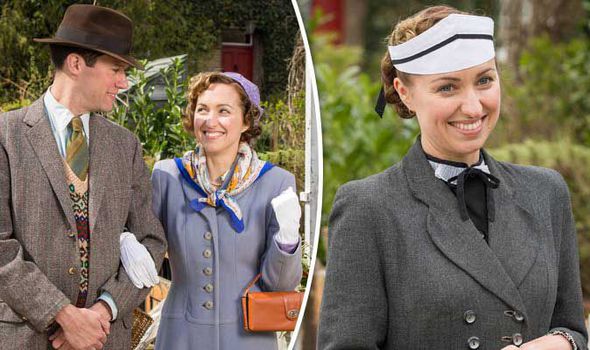 Young Hyacinth focused entirely on a 19-year-old Hyacinth’s early life as a domestic servant for the local gentry. Impressed by her eccentric employers, she vowed to escape her poor background where she lived in a ‘quaint’ and cramped cottage somewhere up North with her alcoholic father (played by Mark Addy) and three sisters, Daisy, Rose and Violet and dream of entering a world of matching tableware, slimline telephones with automatic redial and candlelight suppers.

While we did finally get to see Violet, there was obviously no Richard and definitely no Sheridan as of yet. Even though Richard is not in the picture, Kerry Howard (young Hyacinth) and Katie Redford (young Rose) got together recently to speculate as to who just might be Hyacinth’s ‘young Richard’ should the series move forward.

Even though there was no Richard in young Hyacinth’s life, she does seem to be laying the groundwork for her later life with poor Mr. Bucket. Her current boyfriend, William, definitely hasn’t been beaten down over the years like Richard but one does wonder just how long he would last.

Young Hyacinth works because of Roy Clarke’s spot on writing. When Hyacinth exercises her desperate need for order, she pretended Daddy’s drunkenness was really due to his distinguished war record – “You have been so forgetful since you invaded Normandy, Daddy”. It also works because of Kerry Howard’s ability to capture Patricia Routledge’s brilliant mannerisms to where you can definitely see the seeds being sowed early on for a lifetime ahead of a pretentious appearance of being a cut above the rest.

The question remains whether or not the series would work for those that have never experienced Keeping Up Appearances. Will anyone who doesn’t know the history of Hyacinth, Daisy, Rose and Violet care about these four sisters as they continue to worry about ‘Daddy’. Let’s hope so and that, at 86, Roy Clarke has a number of years and episodes ahead of him for all of us to enjoy.