Surprisingly, the biggest news coming out of the UK these days is not how Brexit will play out but rather how and/or will The Great British Bake Off survive their seemingly greedy leap from the BBC to Channel 4. There has been a great deal of speculation over the past couple of weeks as to what the future of one of the most-watched series on the BBC will be.

Once Love Productions, the production entity behind GBBO, decided to take the money and run to Channel 4 (reportedly, £25 million per year), all eyes turned to the possible futures of judges Mary Berry and Paul Hollywood and hosts, Sue Perkins and Mel Giedroyc. Sue and Mel have since decided to stay aboard the BBC ship while the futures of Mary and Paul are, let’s just say, uncertain at the moment. 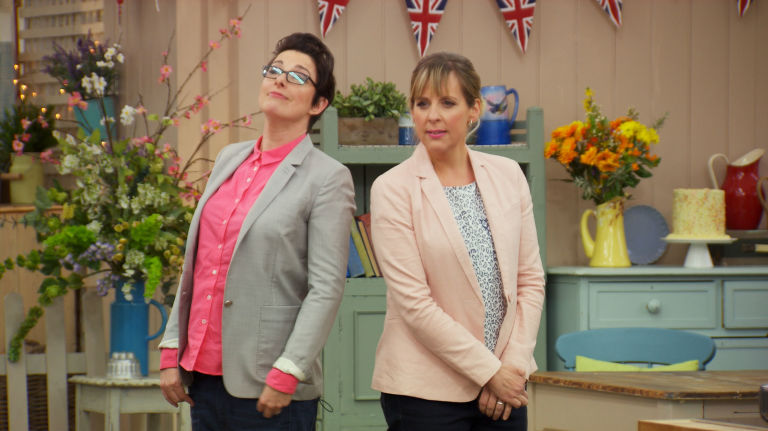 While battle lines are being drawn as we speak among some of Britain’s most notable names, the ensuing controversy even reached as far as the American Emmy Awards on Sunday when , in accepting the award for Best Television Movie for Sherlock “The Abominable Bride”, co-creator/writer Steven Moffat said, “Thank you to the BBC, who we love above all bakery. British people will get that.”

As with everything, these days, bets are already being placed as to who might be in line to succeed as host. According to the UK’s best bookmaker, William Hill, Claire Balding is the odds-on favorite to be named as the new presenter for The Great British Bake Off, with the bookies slashing the odds from 10/1 into 7/1 overnight. The BBC Sport presenter is closely followed by Jo Brand who’s 8/1 for the hosting duties with celebrity chef, Jamie Oliver standing at 10/1. Whatever it is, BBC, Channel 4, Mel and Sue, Mary and Paul…whomever is involved in the future, let’s hope there is still some brilliant GBBO controversy in the days ahead.