As Fawlty Towers celebrated it’s 4th decade this past week, Red Dwarf, the little ‘red’ engine that could, keeps churning out episodes beginning tonight when RDXI returns with six new episodes on Dave. What started in 1987 as a simple low-budget sitcom set in deep space will celebrate 30 years next year with the release of the next set of six episodes, affectionately known as RDXII, taped earlier this year at Pinewood Studios.

At times, cast and crew can’t believe their good fortune of being able to ‘grow up together’ over the last three decades while the production studio streets are littered with series that last only a couple of series. It’s clearly a feeling they don’t take lightly either. 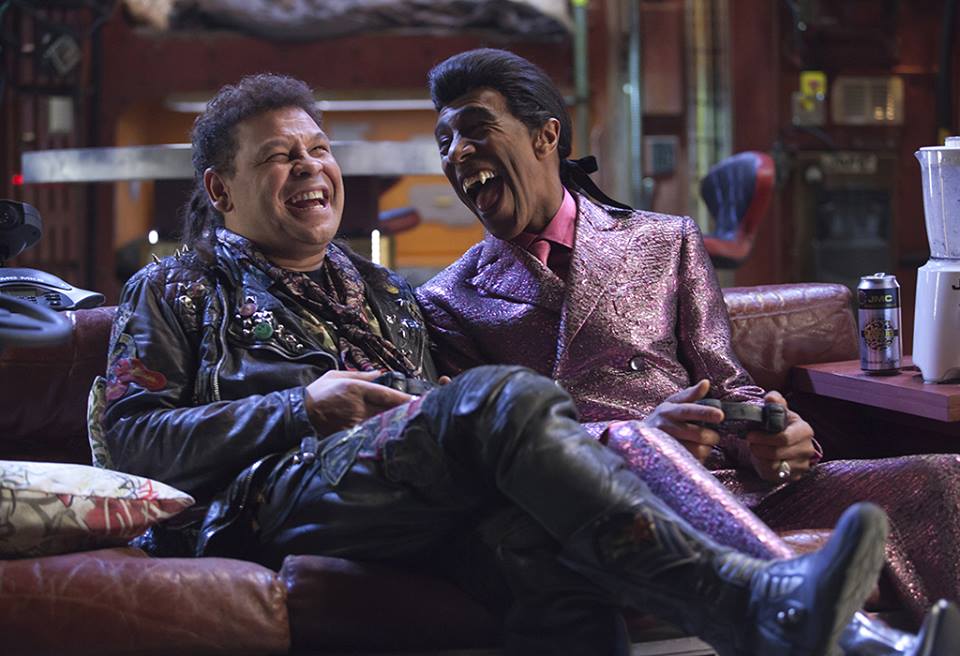 Outsiders for most of their BBC existence, the cast and crew of Red Dwarf seem to enjoy their life in a world that doesn’t revolve around traditional situation comedy. Making the move to Pinewood was probably about as mainstream as anyone wanted to get when it gets right down to it. “I don’t know if we want to be accepted anyway,” said John-Jules. “If we were accepted, then we’d just be doing the same s**t as them.” Most of the crew tends to agree that if Red Dwarf were pitched today, it would never be commissioned.

Co-creator/writer Doug Naylor returns, once again, with producer/son Richard for the next two series. With three decades under their collective belts, Red Dwarf is now in the unique position of now being enjoyed by a new generation of smeg-heads. From all accounts after screening the preview, tonight’s premiere episode will be well worth the four-year wait since RDX graced the small screen back in 2012.

Episode one, which airs tonight on Dave, is called “Twentica” and takes the show’s regulars to an alternative history on 1950s Earth where technology and science have been outlawed by a hostile alien invasion force. Human inhabitants are forced to pursue scientific endeavour in secret. “It is quite interesting and relevant,” Naylor said at a special screening recently. “The horror of a society that represses science, I feel, is quite contemporary.” Pretty heady stuff from a 30-year-old simple low-budget outcast sitcom set in deep space that, probably, those involved spent years sitting by themselves at the BBC commissary when they were the new kids on the block.