As we celebrated the 41st anniversary this past week of Fawlty Towers, I thought it would fun to take a look back at how the greatest situation comedy of all-time made the leap to German broadcaster RTL. The first ever non-English adaptation of the John Cleese/Connie Booth bit of brilliance occurred in 2001 with a pilot set on the German island of Sylt in the North Sea, in a fictitious hotel called Zum letzen Kliff, which translates as “To the Last Cliff”. 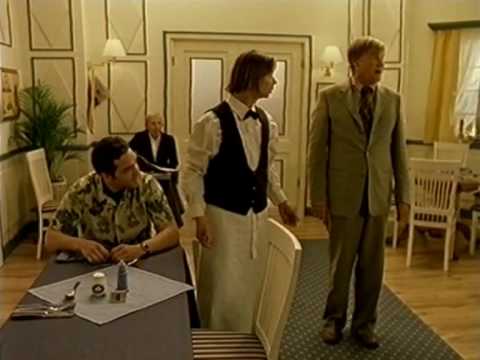 Based on the episode “A Touch of Class” where Basil tries to attract a higher class of customer but ends up being duped by Lord Melbury, a confidence trickster who is being watched by undercover DI Danny Brown. Brown, Poldark fans may recall, was played by none other than the original Captain Ross Poldark, Robin Ellis. Ellis taped the pilot for Cleese’s Fawlty Towers in 1975, before the original Poldark premiered on the BBC in 1977. FYI, you can catch a present day Robin Ellis in tomorrow’s series two premiere of Poldark on PBS.

In the German version, Basil Fawlty was to be renamed Viktor and played by sitcom actor Jochen Busse, while Prunella Scales’ Sybil was to be recast as Helga and played by Claudia Rieschel. Spanish waiter Mañuel, played brilliantly by Andrew Sachs in the British classic would be replaced by a Russian called Igor and played by Dmitry Alexandrov, while chambermaid Polly (Connie Booth) would be called Anne and be played by Saskia von Winterfeld.

Before you ask, the classic ‘Germans’ episode with the iconic catchphrase, “Don’t mention the war” and a goose-stepping Basil, was not to be remade into a German version. Even today, phrases such as “Don’t mention the war. I did once but I think I got away with it” and “Yes you did, you invaded Poland”, along with a goose-stepping Adolph Hitler impression…probably not that funny in Germany. I think I’m going to stick with the British version. Am thinking “He’s from Barcelona” is much funnier than “He’s from Russia”.