Just in case you are in need of a good, old fashioned cry at some point in the not-too-distant future, this is a video all fans of Monty Python, Terry Jones or comedy in general need to see. Earlier this week, Terry Jones received the award for outstanding contribution to television and film to a lengthy standing ovation at the Bafta Cymru awards. Jones announced last month he is suffering from primary progressive aphasia, a severe type of dementia which affects his speech to where he is no longer able to give interviews. He was accompanied on stage by his producer/editor son, Bill, who told the audience that the award was a “great honor”. 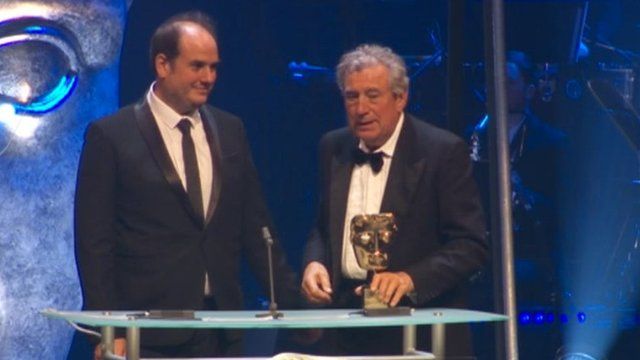 Jones also directed the features The Life Of Brian and Monty Python’s The Meaning Of Life, and co-directed Monty Python And The Holy Grail with Terry Gilliam. Fellow ‘original Python’, Michael Palin, who presented Jones with the award said that the Monty Python team will ‘rally round’ Terry Jones following his dementia diagnosis. Palin, a friend of Jones since they met while studying at Oxford in the early 1960s, said it was a “terribly sad thing to befall anyone”.

In addition to his efforts in the world of comedy, Jones has been a tireless television presenter on a number or history series, most of which dealt with medieval and ancient history, such as Terry Jones’ Medieval Lives and Terry Jones’ Barbarians. Jones is also a member of the UK Poetry Society having had a number of poems published in the Poetry Review. If that wasn’t enough, Jones was an accomplished writer of children’s stories including Fantastic Stories, The Beast with a Thousand Teeth, and a collection of Comic Verse called The Curse of the Vampire’s Socks. According to Jones, he found traditional fairy stories like those from the Brothers Grimm too scary to read to his daughter, so he wrote his own.